I mentioned to you last week that we just celebrated our middle child, Brady's, birthday last weekend.  He requested a Cars birthday party.  What middle-child wants, middle-child gets.

I attempted Tow Mater cupcakes.  That quickly turned into cupcake, singular, after I learned how labor intensive they were.  I used 1 regular sized cupcake for the main body, a mini cupcake for the cab (head) and a regular sized cupcake with the top cut off for the bed of the truck.  I covered all 3 in chocolate frosting (microwaved to make it easier to work with).  I piped white frosting on the head (in a ziplock bag w/ the corner cut off) for the windshield, topped with green M&M's for eyes, white M&M's for the headlights, chicklets for the teeth and mini cookies (Keebler Fudge Shoppe Grasshopper Cookies (100 Calorie Right Bites) for the tires and engine. 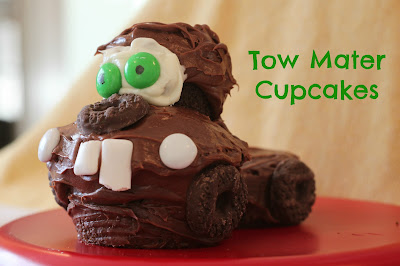 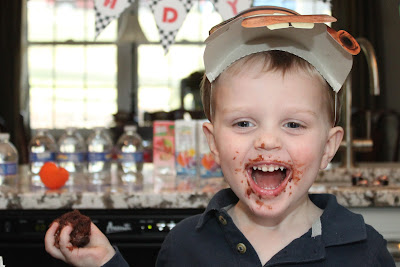 I made him a birthday banner.  I created a sheet of black squares on a PowerPoint slide using the 'insert shape' feature.  Then I added in the letters, cut in the shape of a triangle and strung together on black and white checked ribbon.  After the party, the night before his actual birthday, I moved this banner to his door.  I decorated his door with streamers and the banner for a special morning surprise on the big day. 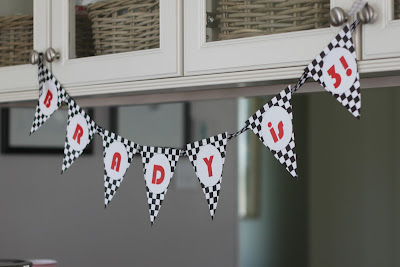 I found these really great, free, printables at http://www.sowonderfulsomarvelous.com/2010/04/disney-cars-birthday-party.html.  I used the Ramone's House of Body Art sign on a table with temporary tattoos and wooden cars that the kids painted. 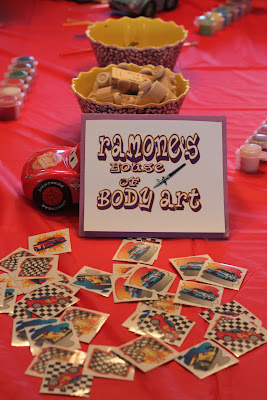 The Fillmore's Organic Fuel sign was used on the iced tea: 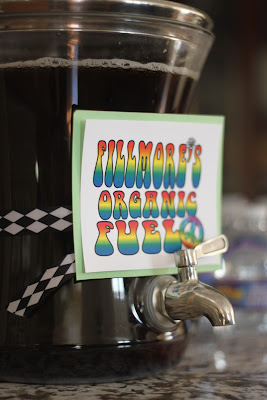 The great thing about this theme is that going through the boys' toy box there is no shortage of toys to be used as decoration.  I topped the juice boxes with Mater and McQueen figurines. 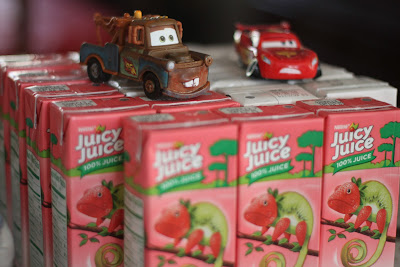 Another free decoration idea.  I found pictures of some of the Cars characters in a magazine ad for Disney World.  I cut them out and taped them to the picture frames on the walls.  Bam, free. 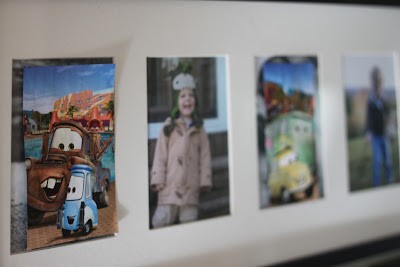 For the dessert I served black & white treats.  Half moon cookies, chocolate donuts (tires) and cupcakes that looked like a road (chocolate frosting, chocolate sprinkles and white piped frosting as lines).  The cupcakes were my plan B after deciding to only do 1 Mater cupcake. 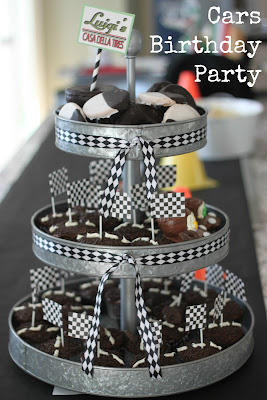 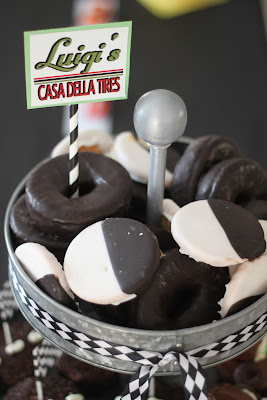 I lined our kitchen island with a black mat with white lines to look like a road (more of the Cars figurines added in for decoration). 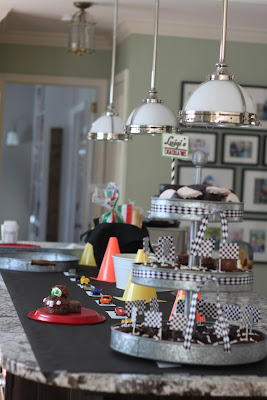 I also laid out a Cars rug and a basket of matchbox cars for the kids to play with.  Love me some free activities/decorations. 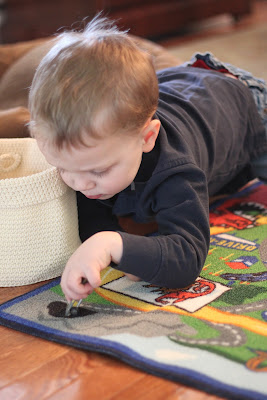 The birthday boy in the Tow Mater hats I found at Oriental Trading.  He slept in it that night :) 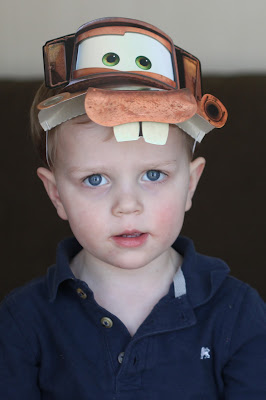 Brady was 'happier than a tornado in a trailer park!'

So I just realized that today is the 1 year anniversary of our little blog.

I'm pretty sure my mom is the only one reading it (thanks for the 25K hits mom!) but it sure has been a nice place to document the various projects and milestones we've tackled in the past year, even if it is just for me.  So today I shall celebrate by thawing a frozen dinner, brushing 4 sets of teeth (hoping one of those sets are mine) and bathing 3 kids...oh wait, that's how I celebrate every day :)
Posted by meg at 1:13 PM 2 comments:

After repainting the boys' bathroom a 'real color' (not a neutral) it needed some breaking up with some art.  I'm into the mismatched look lately.  I discovered Target's Threshold collection and am pretty sure I could marry everything in it.  The polygamist in me couldn't decide and came home with 3.  Sister Wives of the frame world if you will.

One natural wood, one bamboo and one green chevron frame.  I used 3M's velcro strips (my new favorite discovery) to mount them.  I'm not sure how they'll do in a humid bathroom so we'll see. 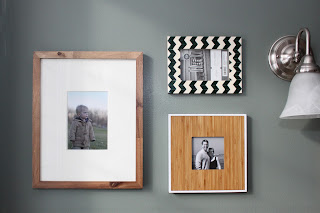 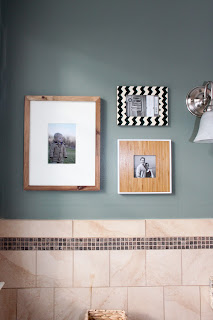 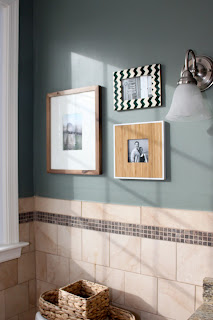 So there you have it.  Not all changes in this house involve demolition :)
Posted by meg at 9:07 AM No comments:

Wild Sage, will you accept this rose?  Last weekend I told you I was jonesing* to repaint my bathroom.      Last night I got 'er done.  Not a lot of wall space but it was a dark color so it needed 3 coats.  I present to you, Wild Sage (which I think could either be the name of a laundry detergent, a stripper or an awesome green paint color). 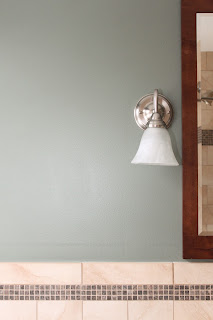 My plan for this section of wall is a gallery of mismatched frames.  I decided to use 3M velcro strips rather than put more holes in the wall because I've heard they're easier to hang and adjust.  I have to wait 7 days after fresh paint before I can hang them so I'm going to be patient.  Ok so maybe the truth is I said 'screw the 7 day wait' and attempted to put them up 15 hours after I painted the room and they crashed to the ground, somehow not breaking...so now I wait the 7 days. 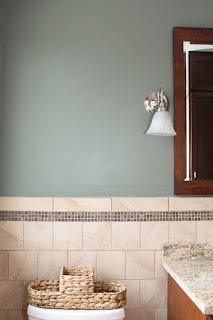 *Fun fact I just googled what 'jonesing' meant because it is a word my mom uses often.  Turns out it originated from heroin addicts in "Jones Alley" NYC in the 60's wanting a hit.  Geez mom.
Posted by meg at 10:55 AM 3 comments: