I can’t believe how fast the kids are growing up.  Bittersweet.  We’ve been tracking their growth with a Sharpie on our office door trim: 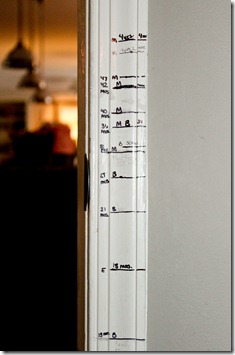 I didn’t want to lose those priceless markings but since I painted the bookshelf I needed to repaint the rest of the trim in the room (“needed to” is relative I understand).  I picked up a pre-cut 1” x 5” x 6’ board from Home Depot and then sanded, conditioned, stained and poly’ed it.  Then I printed out the numbers on paper, cut them out and traced them on the board. 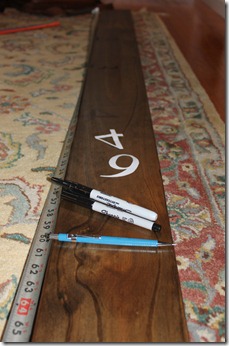 I went over the tracings with a black Sharpie. 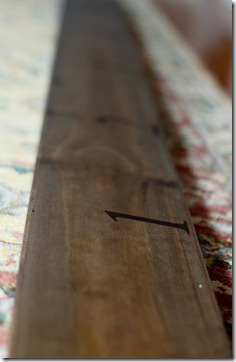 I placed it on the side of the renovated bookshelves because I liked how it picked up the color of the french doors. 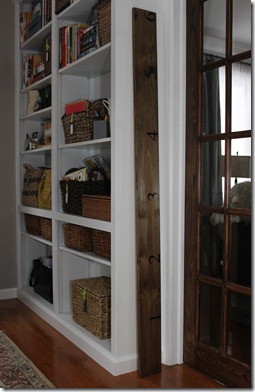 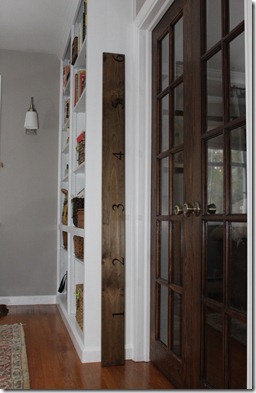 Shared with House of Hepworths
Posted by meg at 6:51 AM 1 comment:

We are in the process of switching computers so I wanted to find my Adobe Lightroom CD so it was ready to install on the new machine.  After digging through our bookshelf in our office I got frustrated and took everything off the shelves to reorganize…then I figured as long as it was empty I may as well sand it down and refinish it.  Does everyone’s brain’s operate this way?


I decided early on that this was the very definition of turd polishing.  The shelf was built on the old carpet and when it was removed it left a ring of carpet pad.  There were gaps at the sides and ceiling.  It was pretty bad but I pushed on with the polishing
.
This is the before of the room when we moved in. 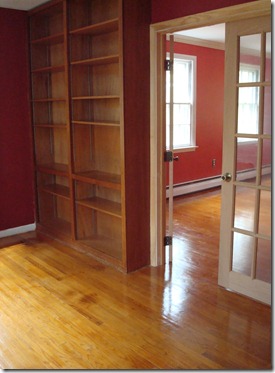 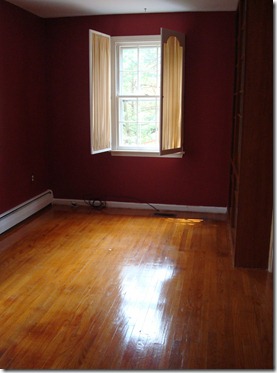 I sanded the bookshelf with an orbital sander and then primed it with an oil based primer.  I don’t usually use oil based unless it is a wood I’m not totally confident is perfectly dry or in instances like these where I need a really good sticky coverage.  It is really stinky stuff so keep the windows open and place bowls of baking soda around the room.  Then I painted it with 3 coats of Benjamin Moore’s Decorator White leftover from our master bath reno.

I was pleasantly surprised with the result! 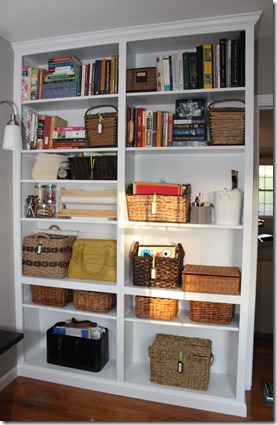 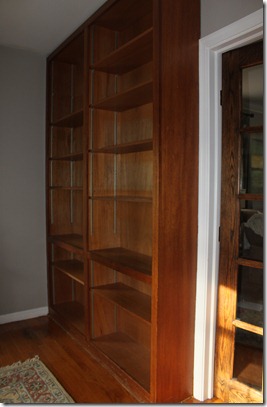 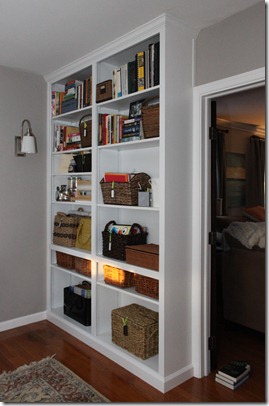 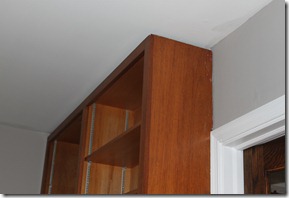 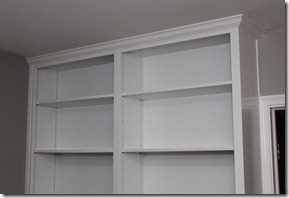 Gross carpet pad that the shelves were apparently built on top of now hidden by baseboard trim. 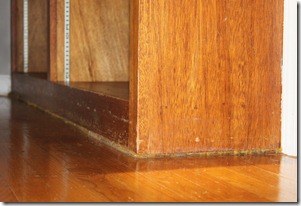 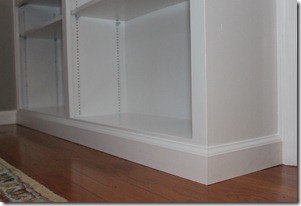 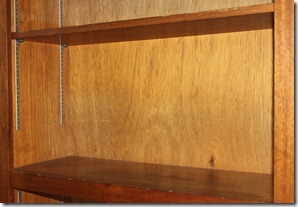 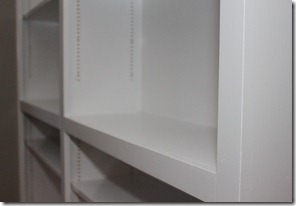 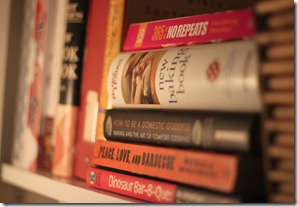 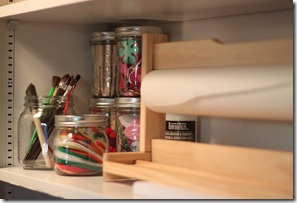 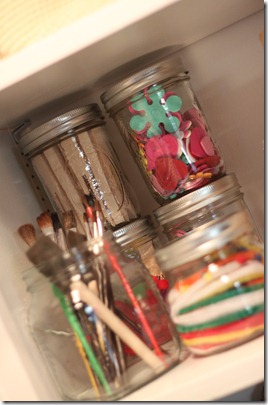 Labels for the baskets to hide the clutter. 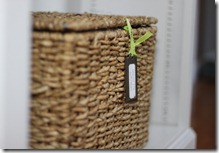 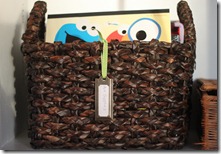 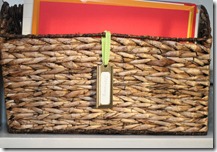 And to keep it real, it actually isn’t all that well organized. This is what one of those baskets looks like. 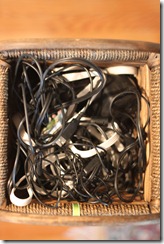 Since we already had out the nail gun and paint we also decided to trim out our master bedroom.  Oh and since we were already working on the master bedroom Sean figured he’d build 6 tongue and groove closet doors from scratch for our new closets.  That’s normal behavior right?  It is a good thing we’re married to each other.  Anyone else would divorce us.

In my past life staying up until midnight, drinking champagne and watching the ball drop was a good time.  Now I can’t remember the last time stayed up until midnight…heck I haven’t even seen Saturday Night Life in years.

Holidays take on a whole new meaning and become a little more special experiencing them through the eyes of children.  New Year’s Eve is usually reserved for adults but in order to bring the fun to our kids Sean and I threw a “Countdown to Noon” party with our friends and their little ones.

We had an easy menu of strata, bagels, fruit and cookies, all of which could be made the day before.  There were bubbles in containers shaped like champagne bottles, noise makers and hats for the kids.  At the stroke of noon we had a “ball drop” (balloons) and kissed our babies.

All in all a pretty sweet way to start out the new year.

Party hats for the big kids… 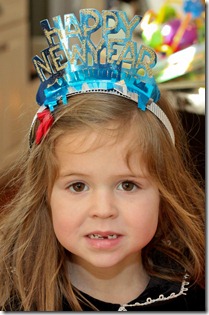 …and for the little guys to! 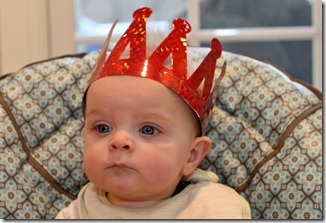 The party hats doubled as snacks for some. 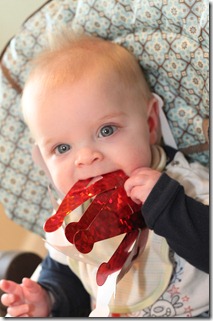 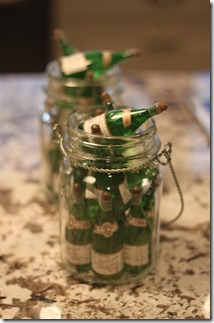 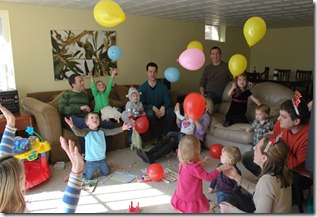 Hugs from the little ones started 2012 out perfect. 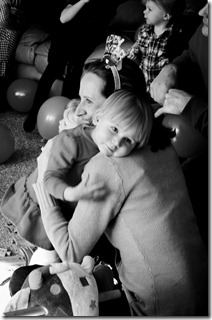