Baby boy's room is painted!  I went with the tried and true Benjamin Moore Revere Pewter that we used in our Master Bedroom.  A quick reminder of the mustard color we started with: 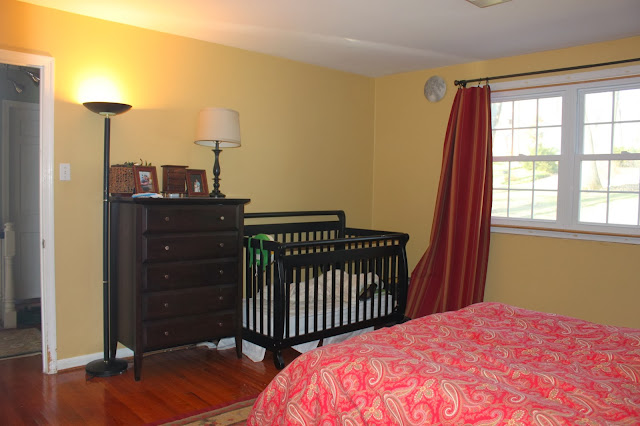 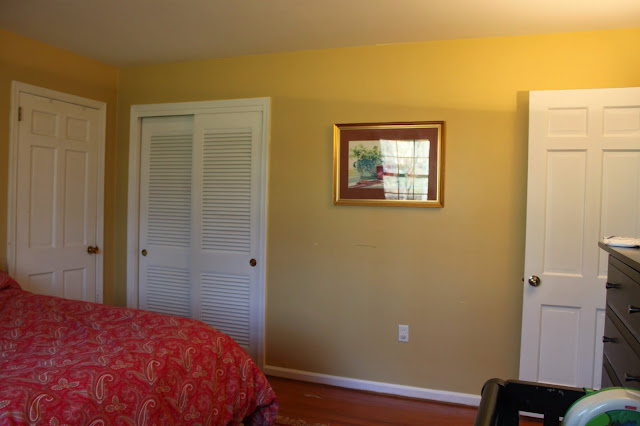 ...and just a peak into the new color! 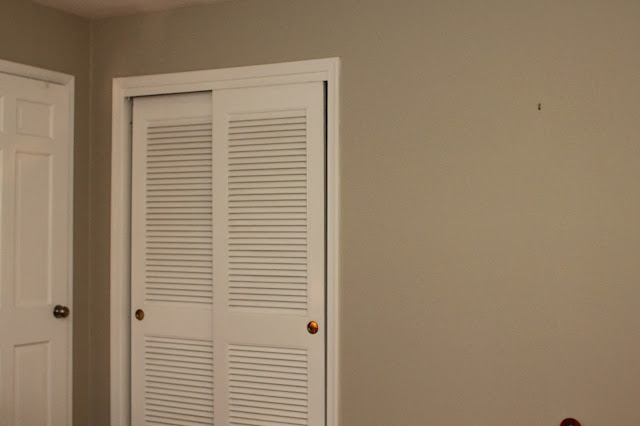 I'm working on a headboard so once that's done I'll post the final pics of the finished product. 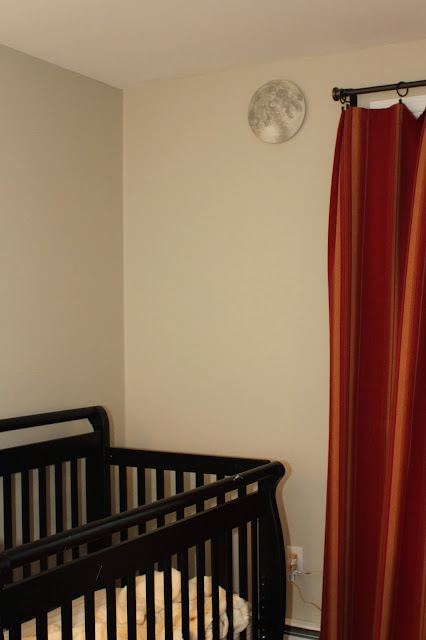 We tend to work on multiple projects at a time so that's how I'll share them with you.  Probably feels scatterbrained to read but that's how it feels on this end.

We spent last New Year's Eve building our Ikea Pax hack closet doors so it is only fitting that I share with you the last step in that process this New Year's Eve Eve.  My favorite part of this hack was the hamper drawer.  We added a drawer front to give it a cohesive look with the doors: 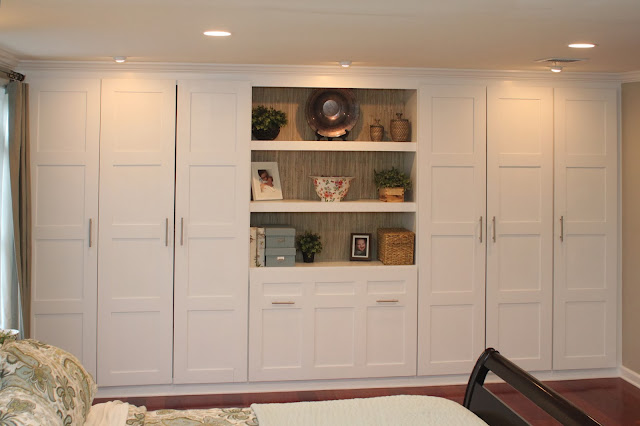 You can find the steps we used to build the face here.  We backed into the drawer face design by lining up the horizontal pieces from the doors. 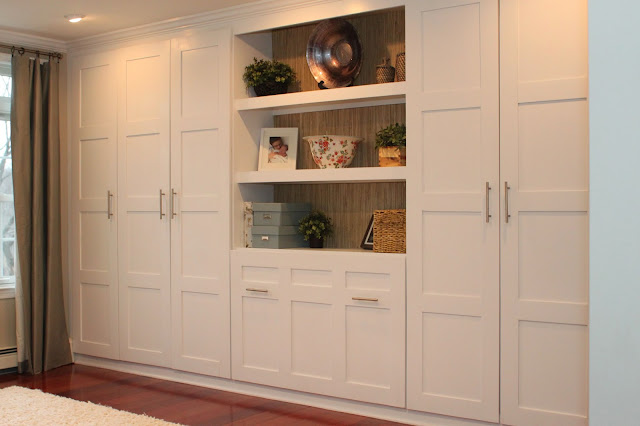 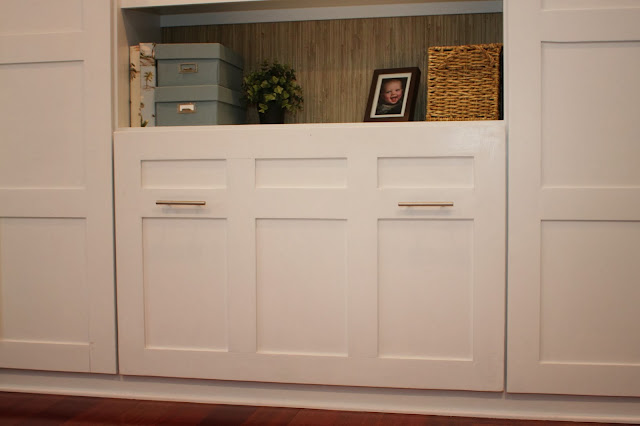 Here is what I'm currently thinking.  I'm leaning toward the same Benjamin Moore Revere Pewter that I used in the master bedroom.  I'm using the existing drapes and then adding some nightstands and art from Overstock, lamps from Ikea and bedding from Pottery Barn Kids.

Before I can get started though I have to do all the prep work.  Paint the window trim that I've put of painting for 4 years since the windows were replaced, repaint the baseboards and doors, fix nail pops, touch up spackle, etc.  For the trim and doors I'm going with Benjamin Moore's Decorator White.  It is a very dark room so the brighter I can make the paint the better.  While I'm at it I'll also swap out the 50 year old brass doorknobs with brushed silver to match the rest of the house and replace the outlet covers with crisp new ones.

By the time baby boy #3 blessed us with his presence we were already full-time working parents to a 1 year old and a 2 year old and renovating our home.  We were stretched thin.  We set up his crib and called the nursery decorated.  It was a loose interpretation.  I love interior design but I've never really been one for nurseries.  They're babies for such short periods of time so I figured I'd just wait and design their rooms when they were a bit older.  So here we are. 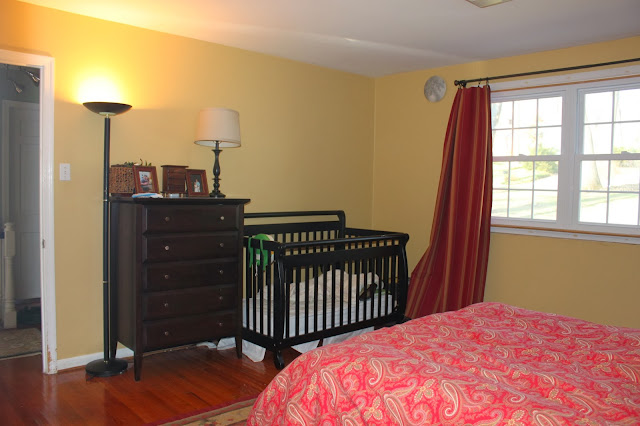 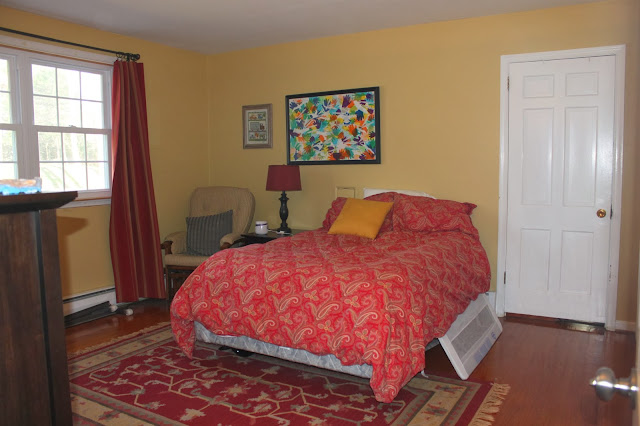 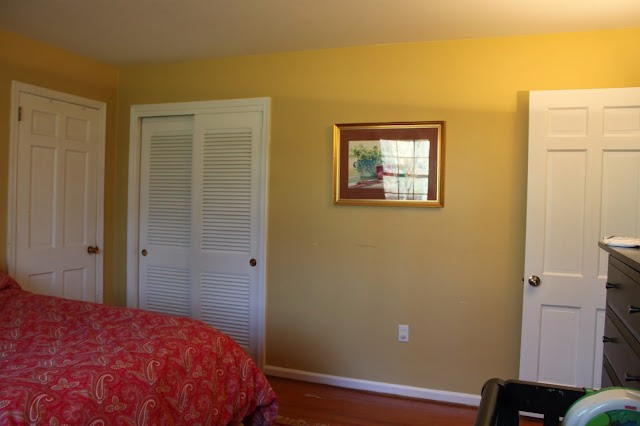 The first things I'll tackle are to freshen up the room with new trim & door paint, swap out the brass door knob and outlet covers and then paint.  You can't tell here but the hardwood floors are in rough shape and cannot be refinished so we're considering installing wall to wall carpet.  We're hardwood floor people but we're hoping that carpet can create some noise insulation and make the bedrooms cozier.  Maybe we'll revisit hardwoods down the road.
Posted by meg at 4:00 AM 1 comment:

Having three boys in under three years has meant that we have been immersed in baby boys for the past 5 1/2 years.  We've been swimming in diapers, given over 4,300 baths, fed over 5,000 bottles and read Goodnight Moon at least two thousand times.  We made it through, oftentimes bleary eyed, by putting one foot in front of the other.  Then all of a sudden we looked up and our 'baby' was a 'kid.'

This "baby" is a spunky little guy.  When I was pregnant with him and watched the close bond the older two had I worried he would be left out.  Now I know that is impossible.  His big personality would never let that happen.  He's a 2 year old that thinks he's a 5 year old.  He squeezed himself tight into that boy pack and those three are now thick as thieves.  They are so lucky to have each other.  I am so lucky to have them.

He is 2 1/2 and while he has no interest in leaving his big boy bed behind just yet (nor do I) I thought I'd give his room some thought in anticipation of the transition.  I'm going for a look that will grow with him.  Neutral walls, classic bedding and nothing too 'cute.'  Here are some rooms I love.

What's not to love here?  The woodwork, the lighting, the color scheme, the lighting.  The table in between the beds is just asking to be a diving board though. 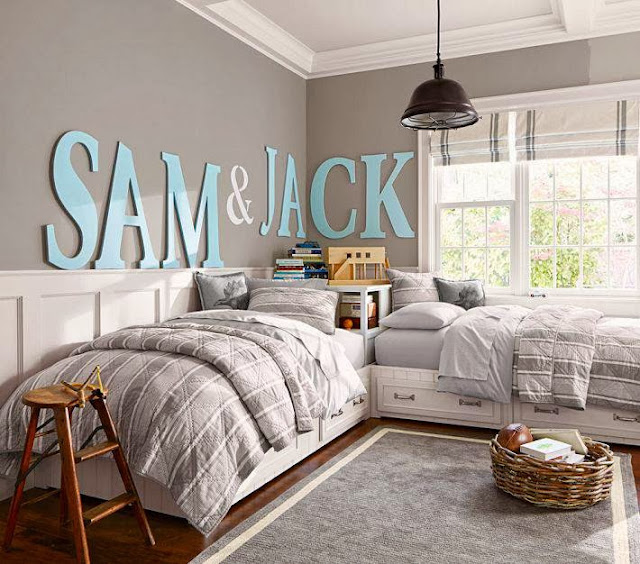 The headboard, the lighting. 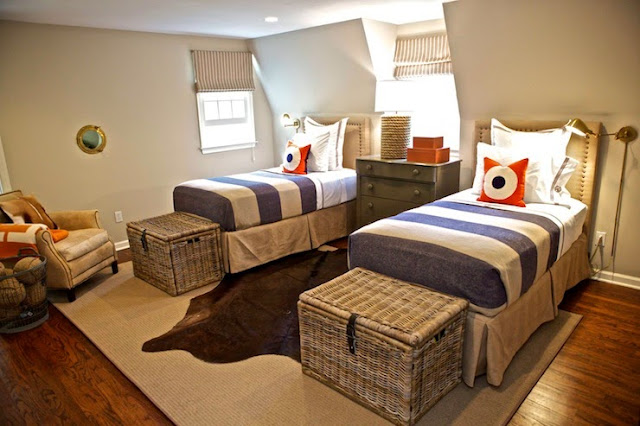 I thought about them sharing a room for about 5 minutes.  Then I realized that would be complete insanity and their constant puppy piles would extend into the late nights and early mornings.  No thank you.  Moving on.  Like the style though. 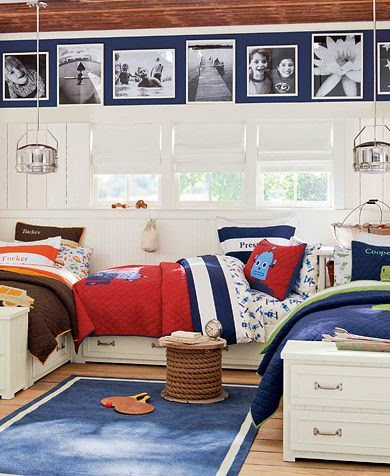 
I'd like to incorporate a map somehow in the room.  I like the interesting placement in this one. 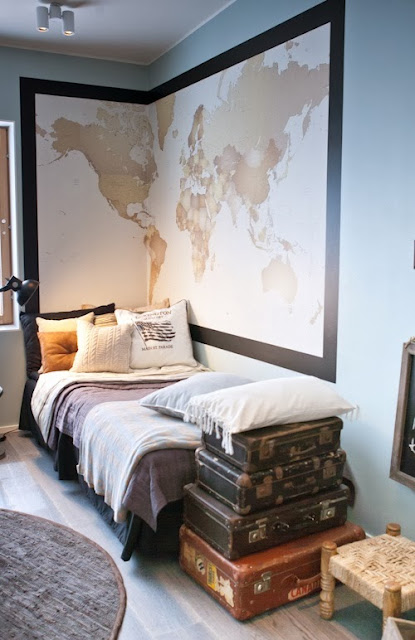 source
Posted by meg at 9:48 AM No comments: