99% complete - just ignore the black square hole - that's where the outlet needs to be pulled through.  This was the "small" paint job that turned into a massive project but I'm really happy with the end result. 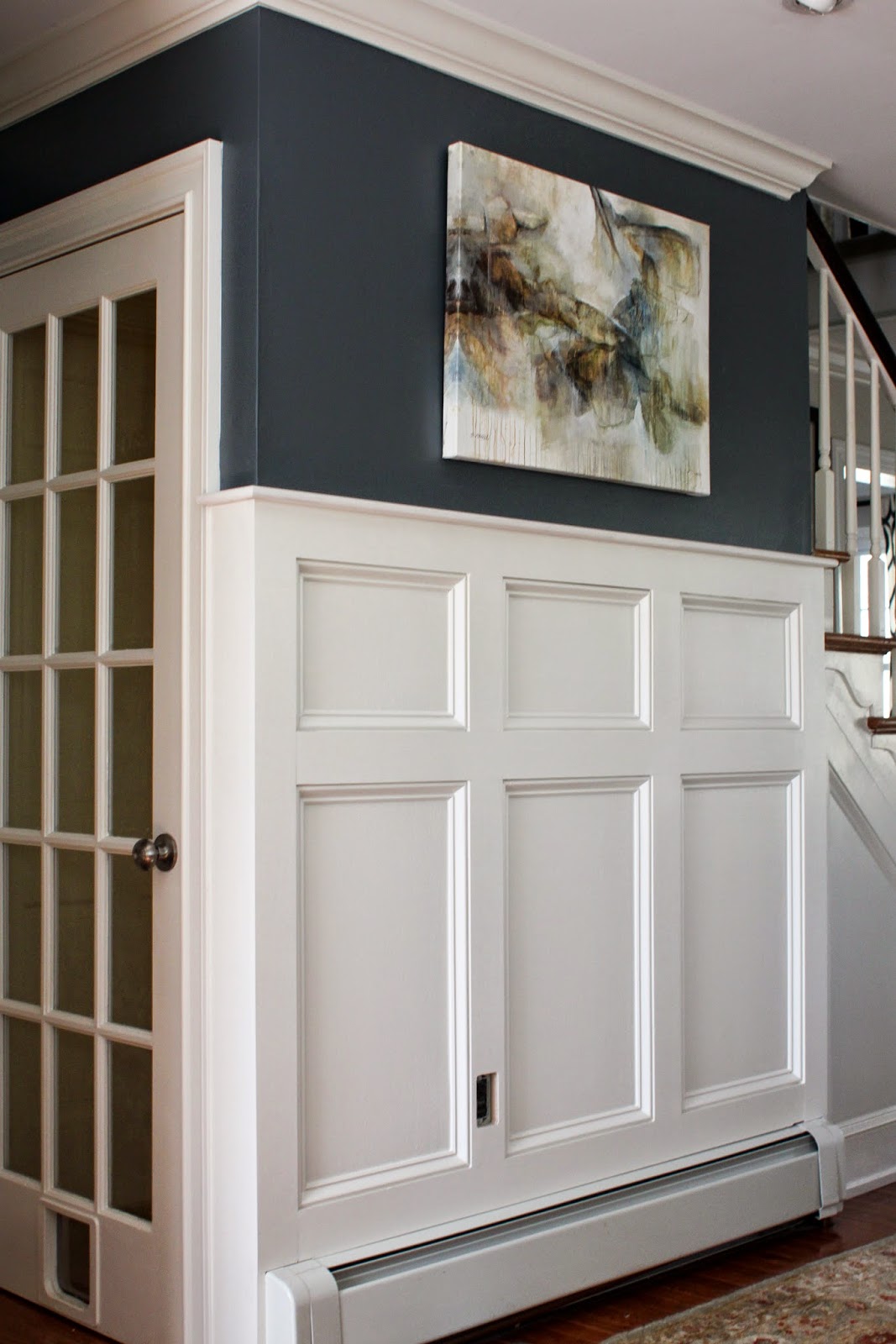 And the reason we needed new paint was because the old green clashed with the green wallpaper in the powder room.  Sherwin Williams Slate Tile which is approximately a 4:1 mix of Benjamin Moore's Haley Navy and Revere Pewter.  Mission accomplished. 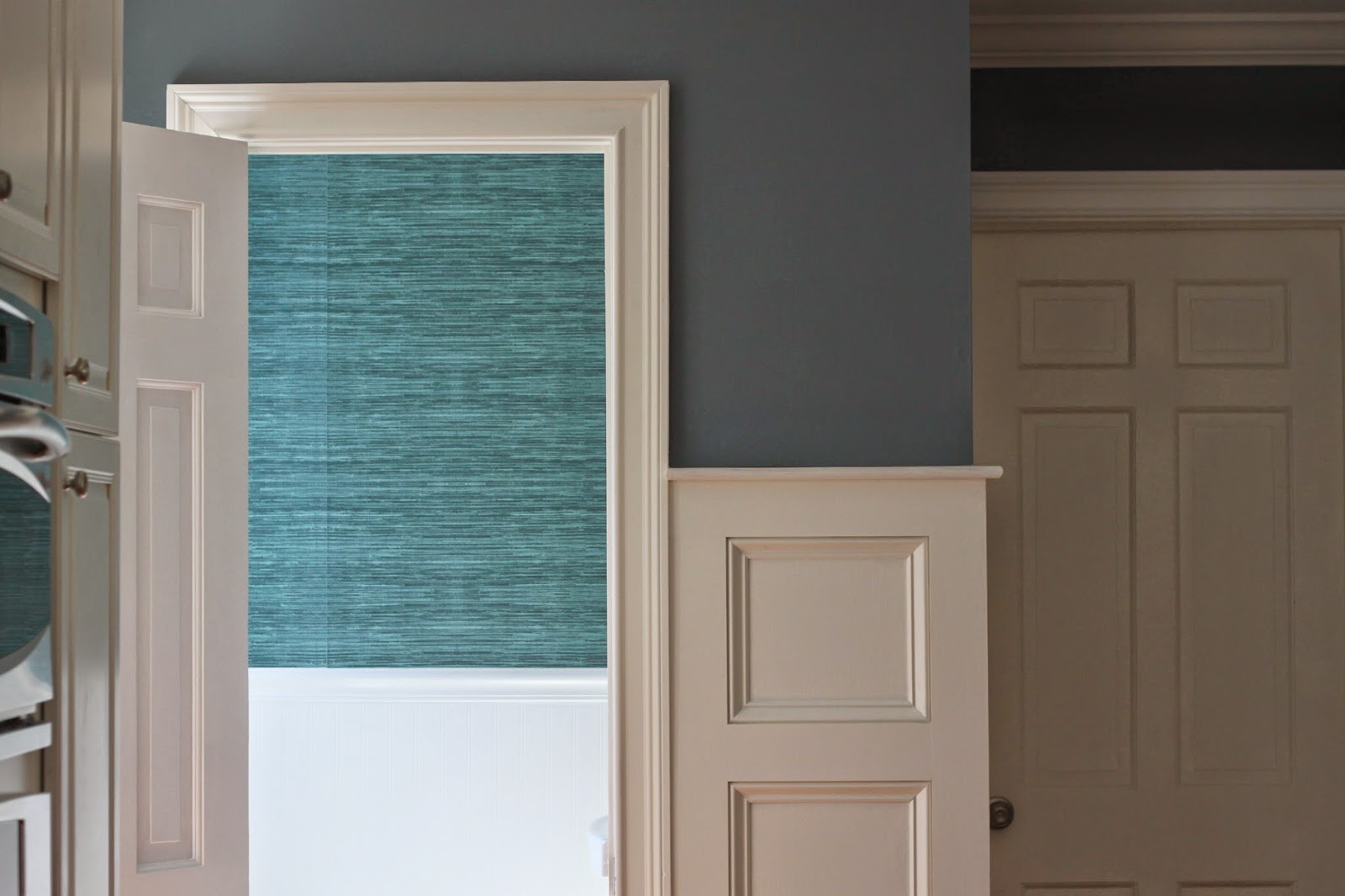 Sean showcased some of his carpentry skills. 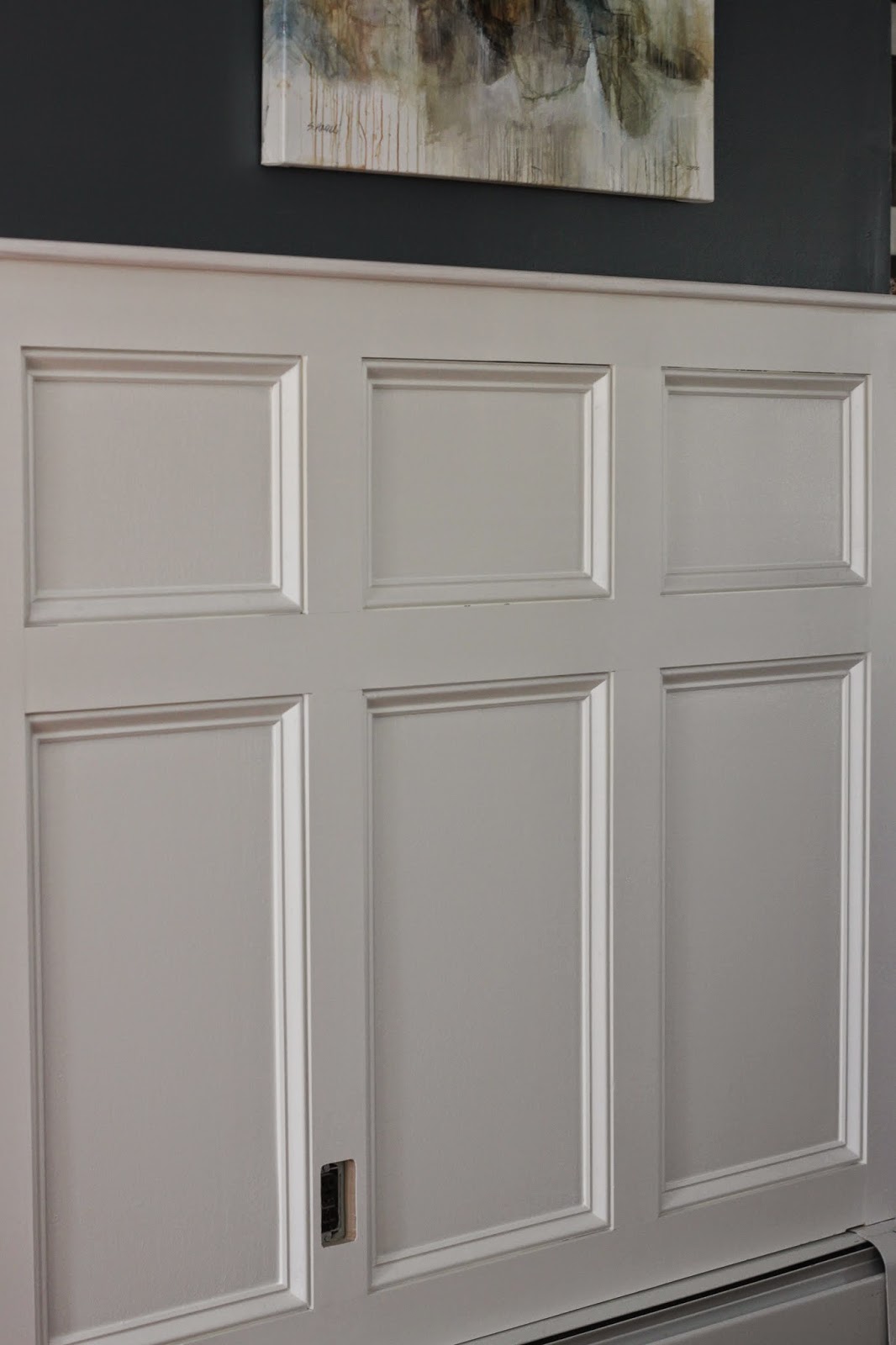 I picked up this canvas abstract from overstock.com. 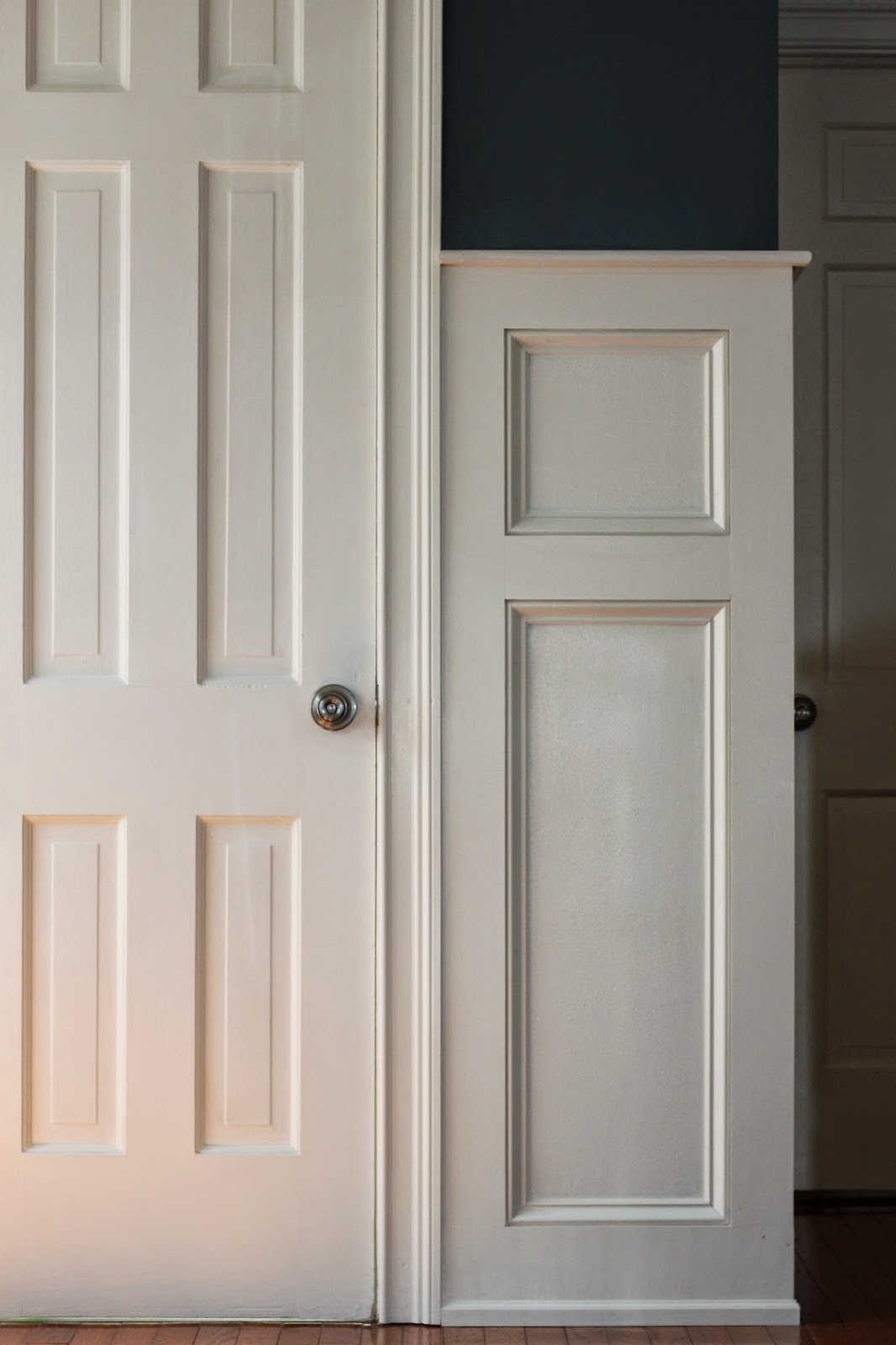 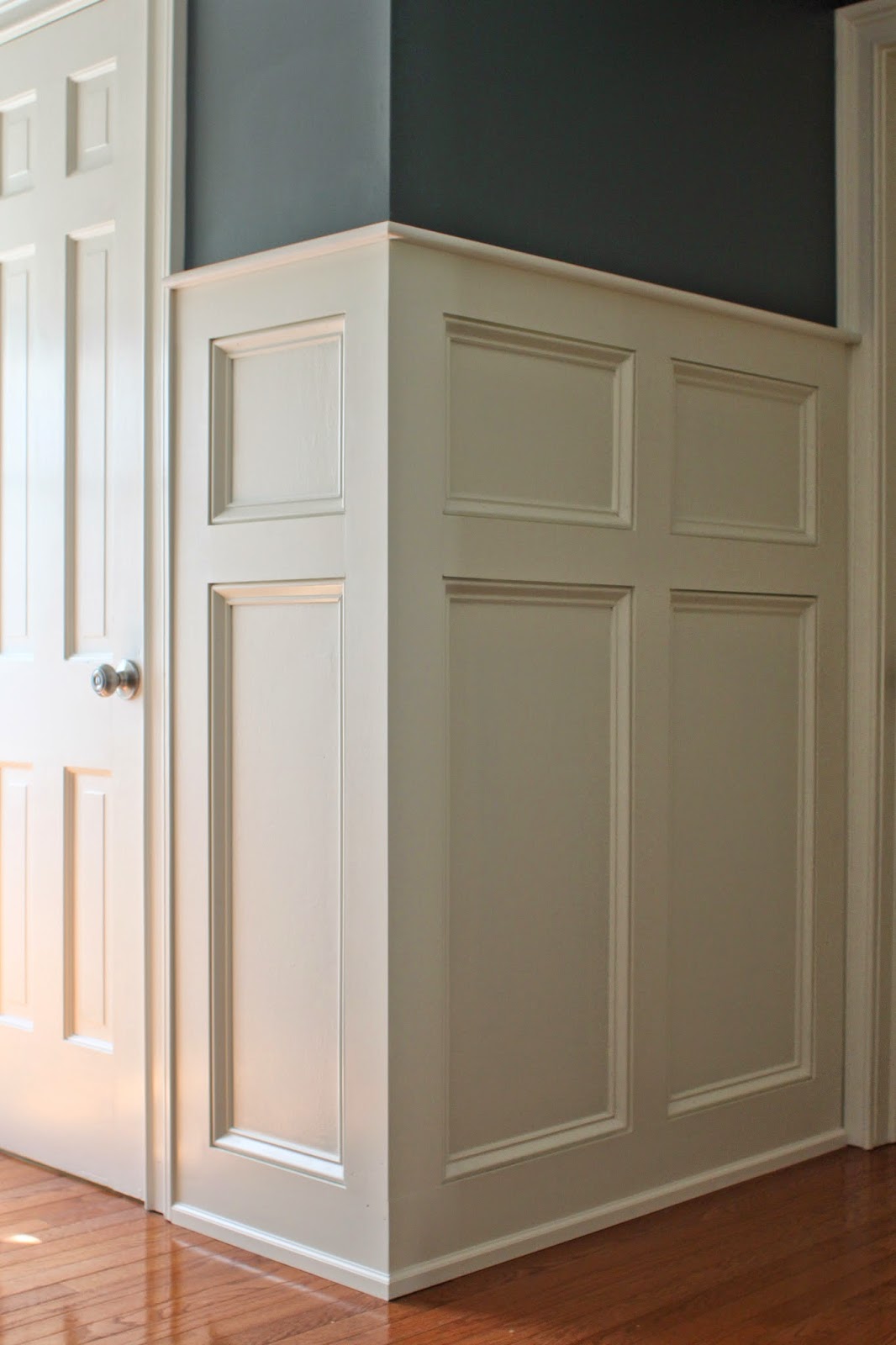 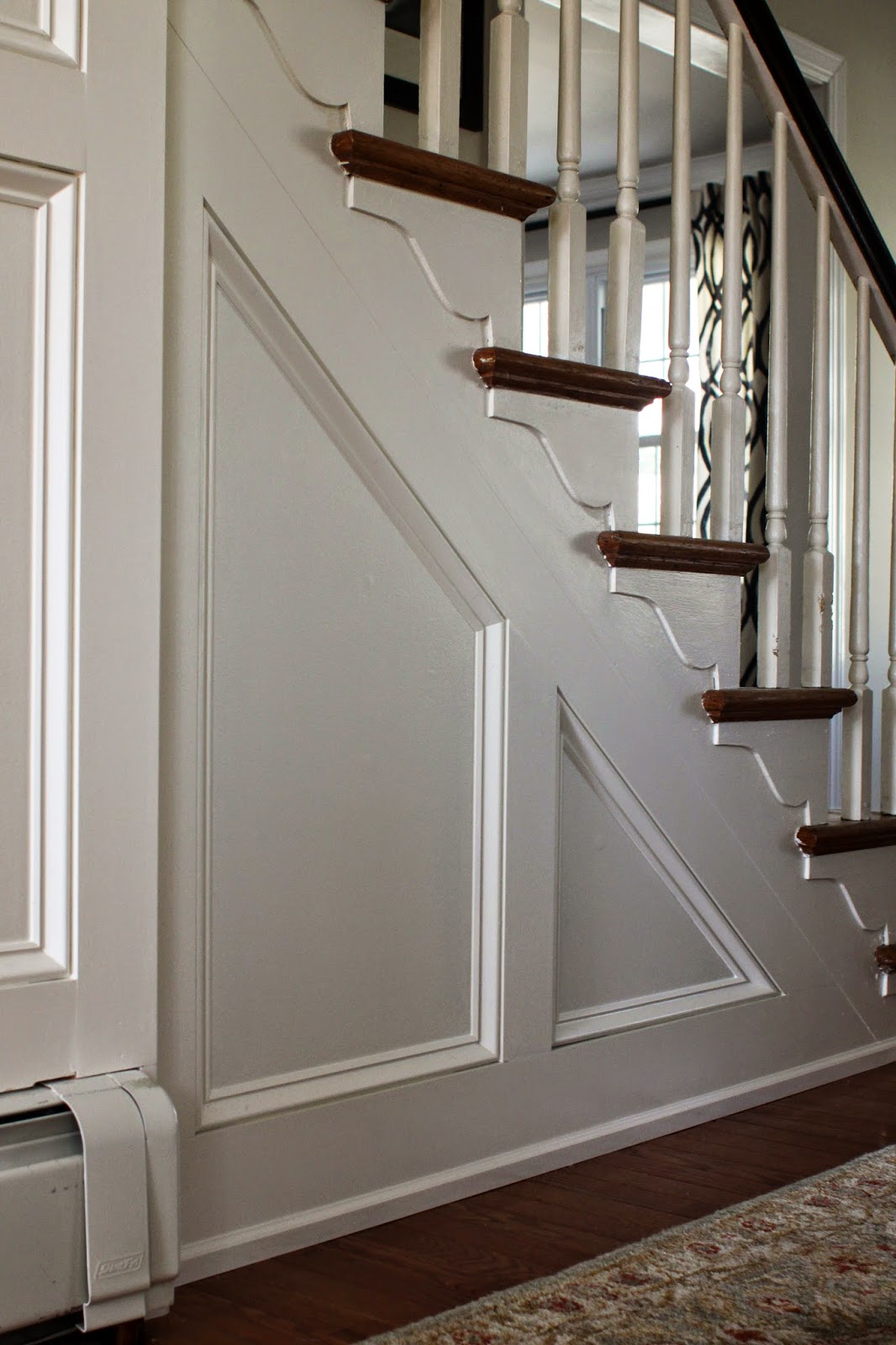 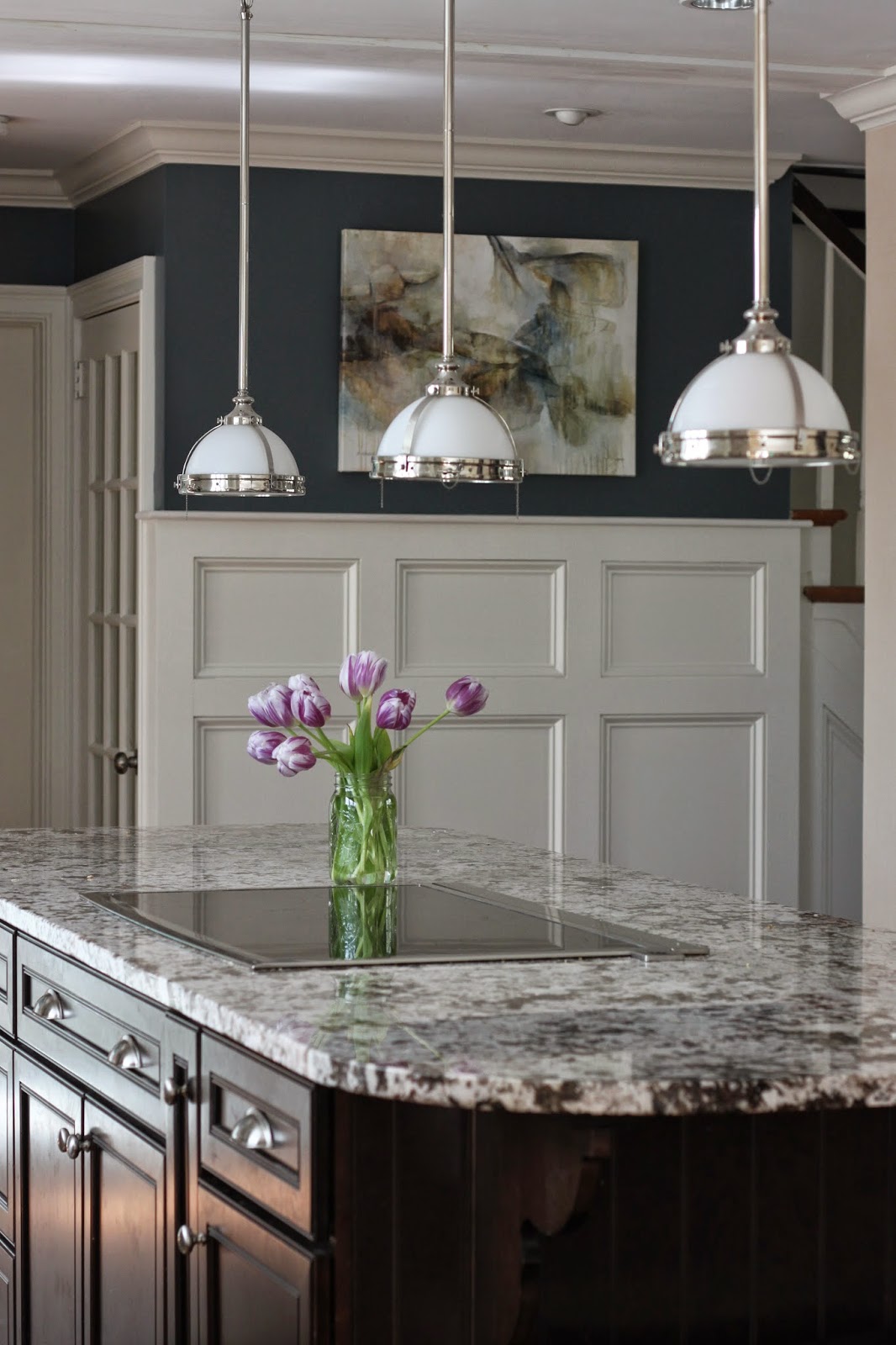 Sean's already talking about how we "have" to carry the wainscoting through the foyer and family room now.  It is a good thing we're married to each other.

So I mentioned previously that I had planned to go with Indigo Batik by Sherwin Williams. 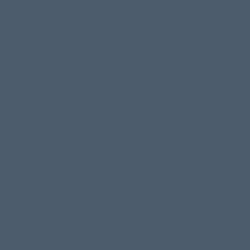 Spoiler alert - it looked terrible on my walls.  Getting swatches always feels like a waste of money and time but almost every time I end up choosing a different color than I would have thought based on the little cards.

When choosing a blue for your wall paint always go grayer than you'd think.  In large doses it reads way bluer than it does on the card (and even on the small test swatch).  Also apply test swatches on each wall as each wall may show the color a little differently based on lighting.

I mixed some Benjamin Moore Haley Navy and Revere Pewter I had on hand (4:1 ratio) and ended up with that gray blue on the white scrap wood in the bottom right hand corner.  That was my end goal.  I ordered samples of 4 different shades of what looked like gray blue on the cards.  Top left was too green, top right (Indigo Batik, the original inspiration) was too purple and the bottom two were the contenders for a true gray/blue.  The one on the right looks about right and the one on the left looks pretty gray but using my "always go grayer than you think" rule I went with the one on the left.  Slate Tile by Sherwin Williams.  Even the name sounds gray. 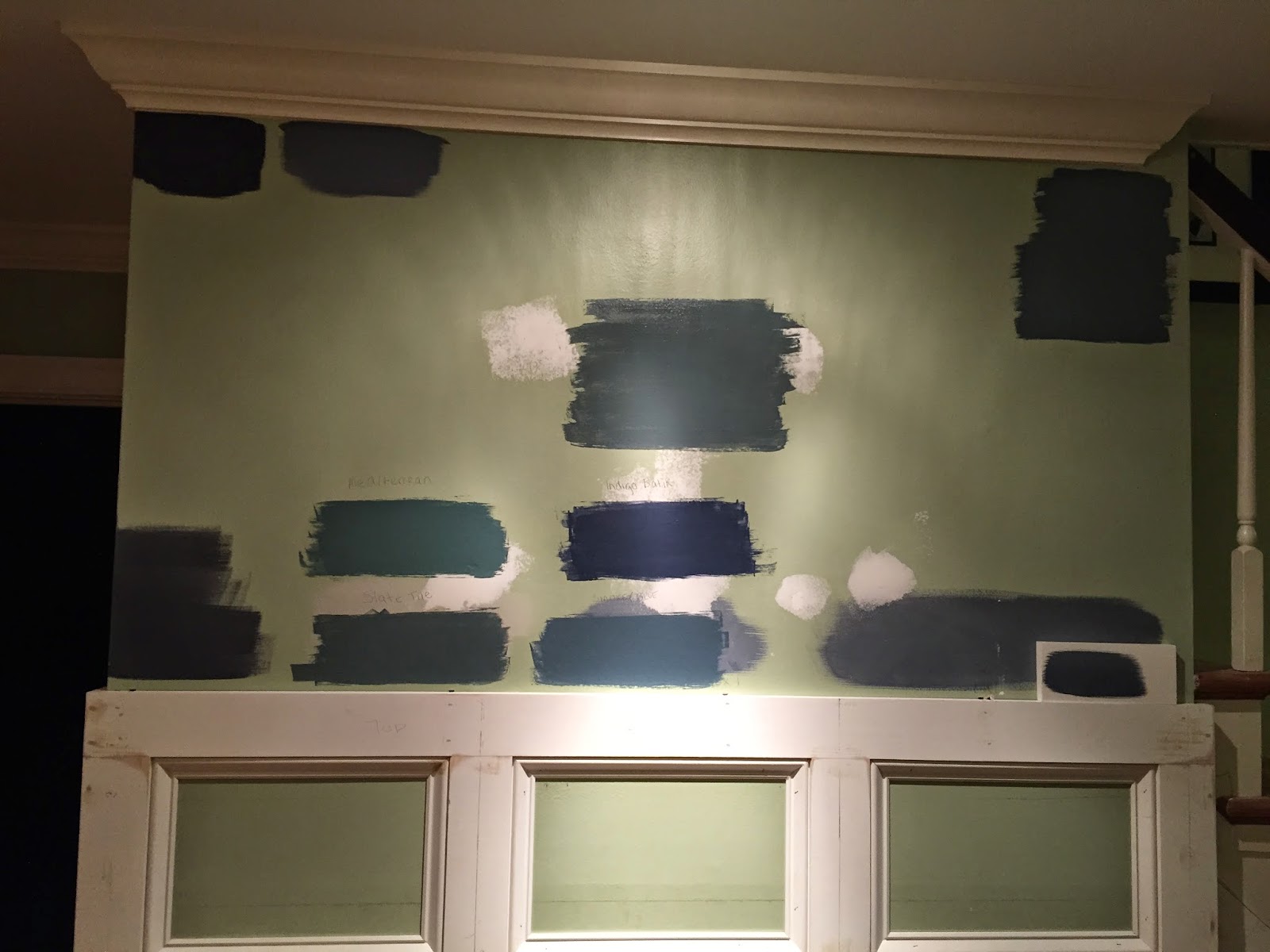 This one ended up as the winner winner, chicken dinner: 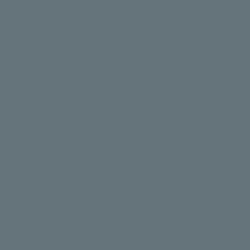 Then in large doses it looks like this.  Magically it reads much more blue. 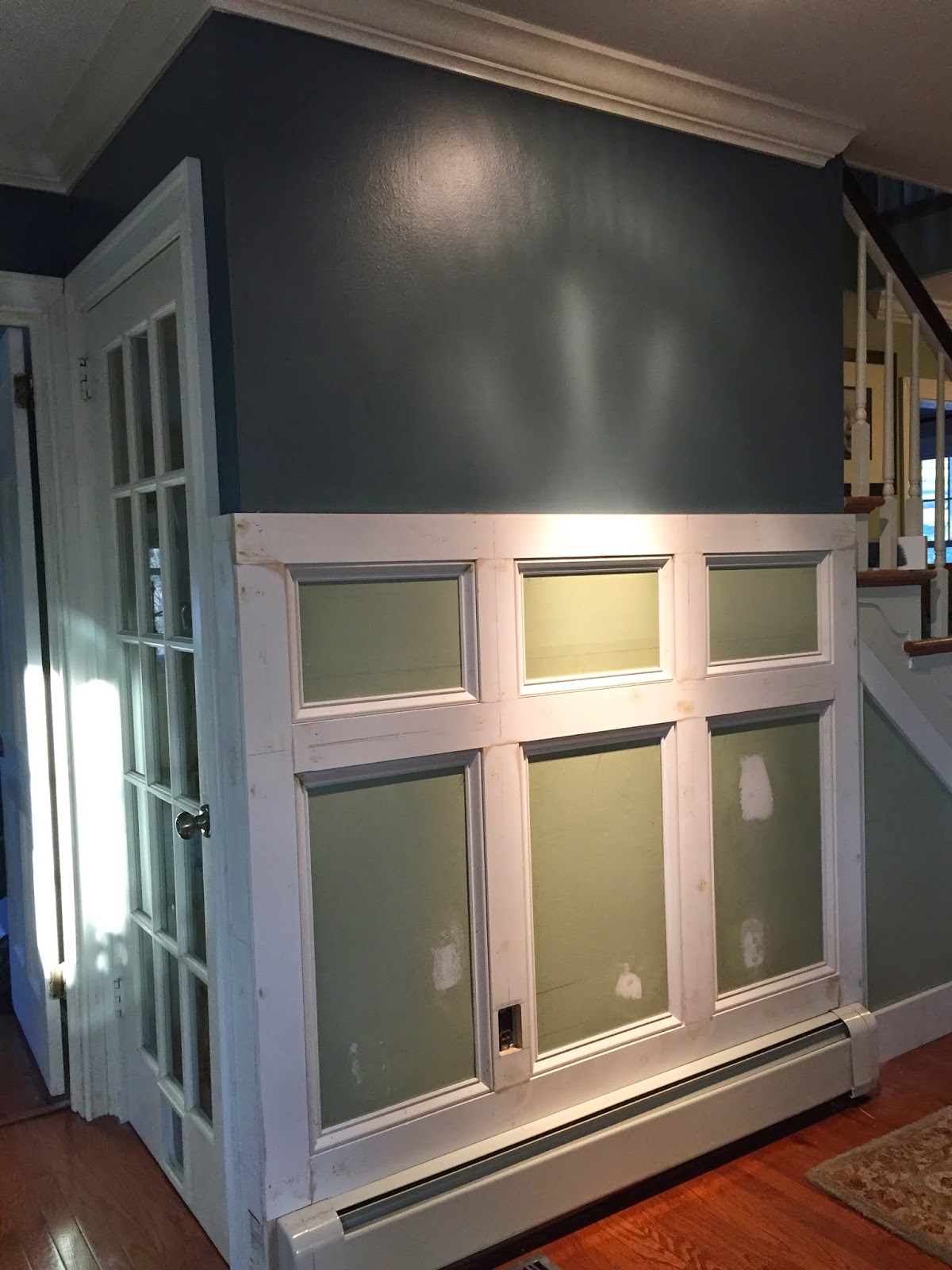 I'm still not totally sold but I'm hoping that once I get rid of that green and add some art I'll feel better about it.
Posted by meg at 5:00 AM 1 comment:

Wainscoting has begun. A reminder of what we started with: 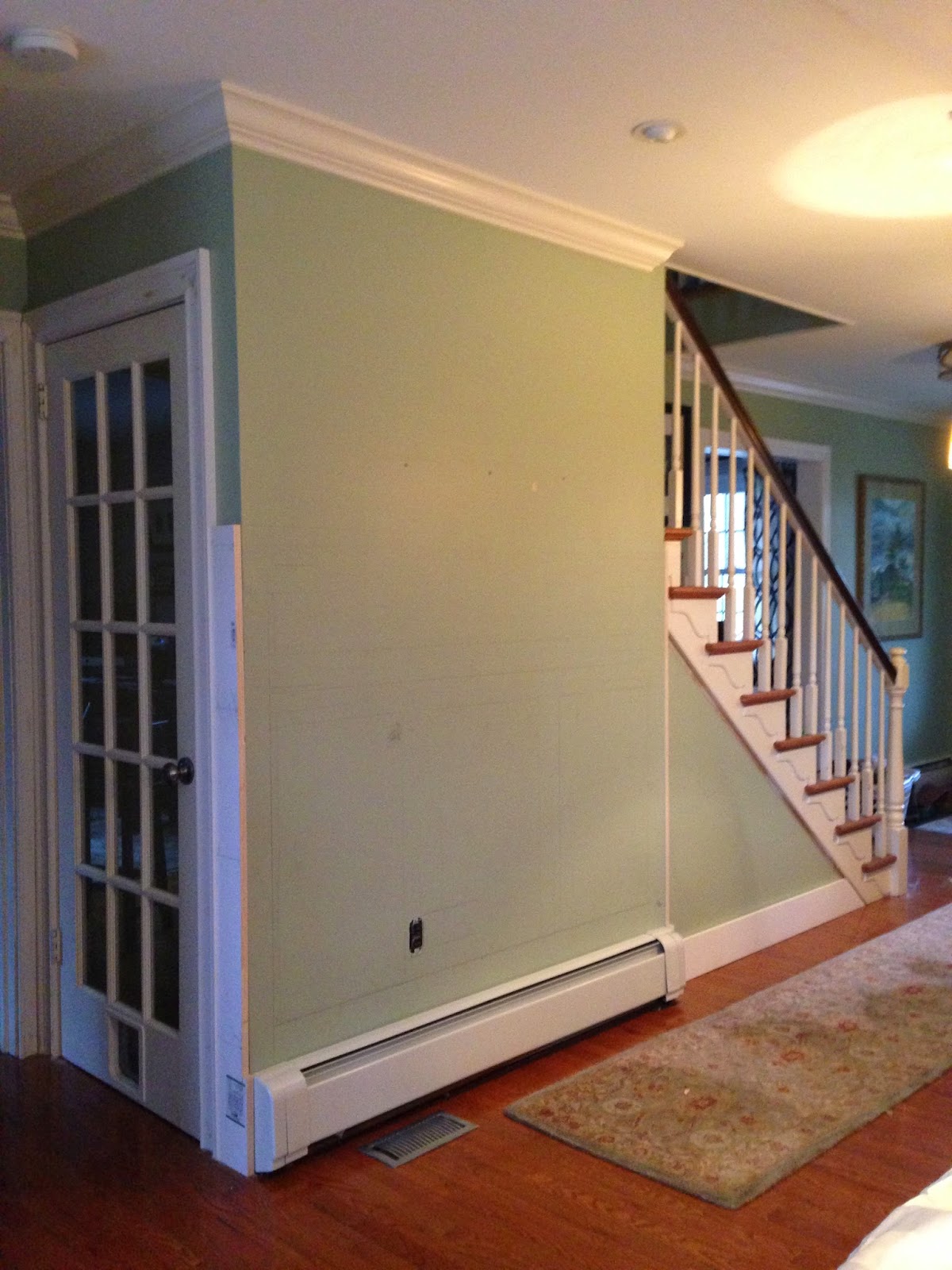 We're not carpenters by any stretch of the imagination but the approach that has worked best for us in the past is: 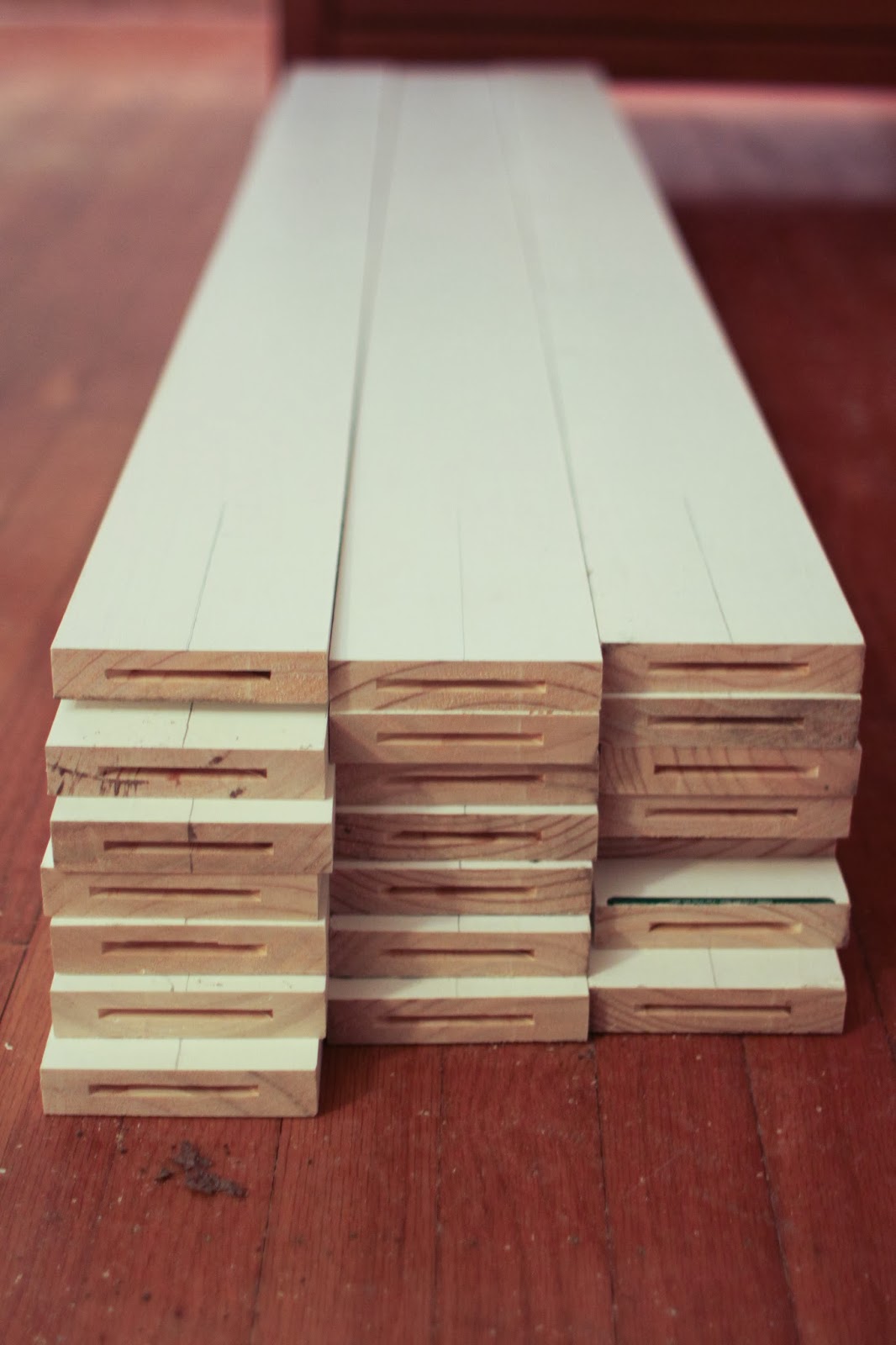 Dry fit everything.  This isn't exactly what our design looks like (ours doesn't have the 2nd baseboard) but pretty close and gives you an idea of how to layer wainscoting:

Mark the centers (building a jig helps) and number each piece while still on the wall so you can put it back together again.

Biscuit the ends.  Biscuits are little discs of wood and if you route small holes on 2 pieces of wood, apply glue to both holes will create a nice, strong bond. 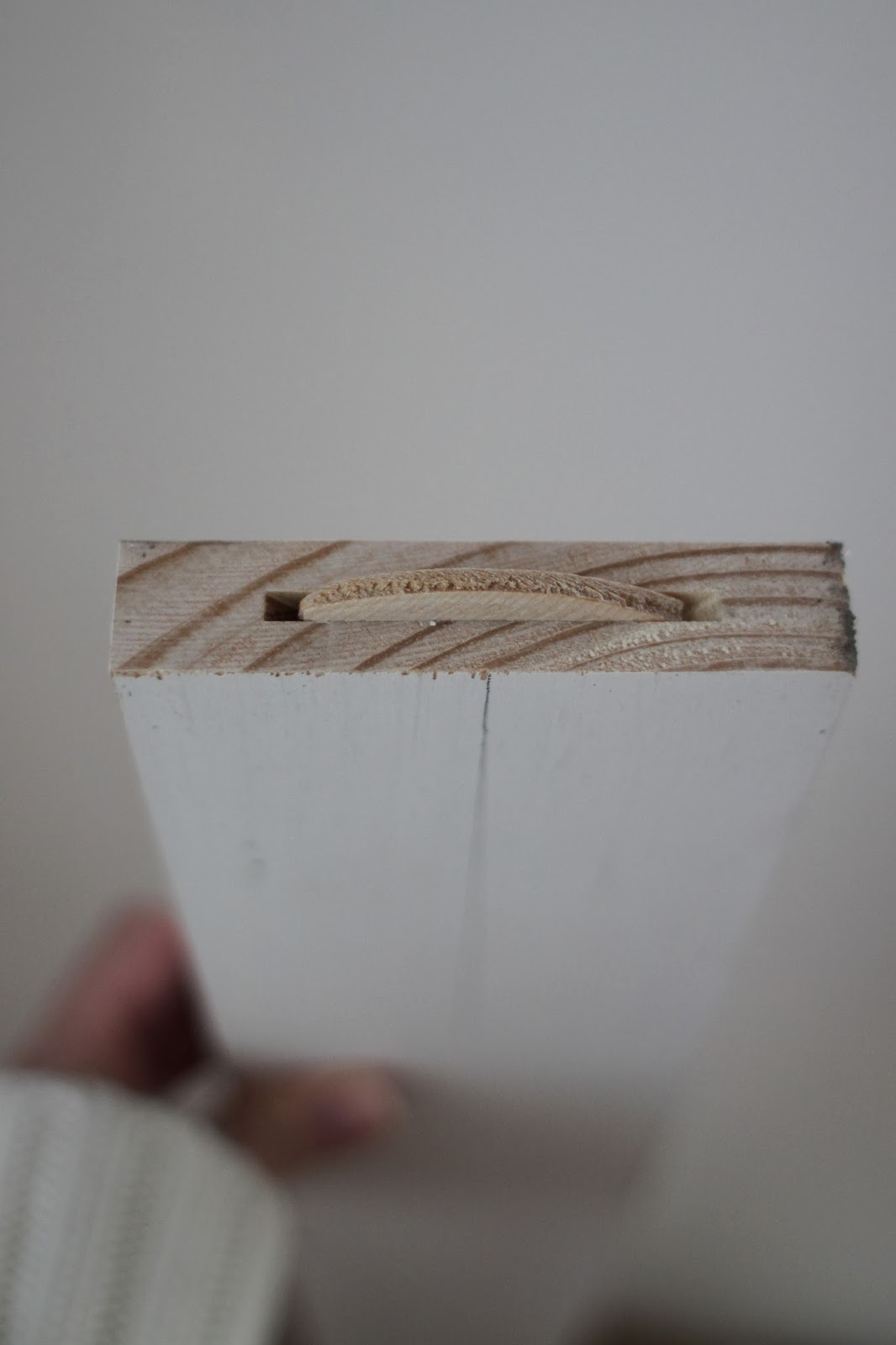 Ask your 6 year old to mark all the studs.  Giving a kid the freedom to write on the walls is pretty awesome to them. 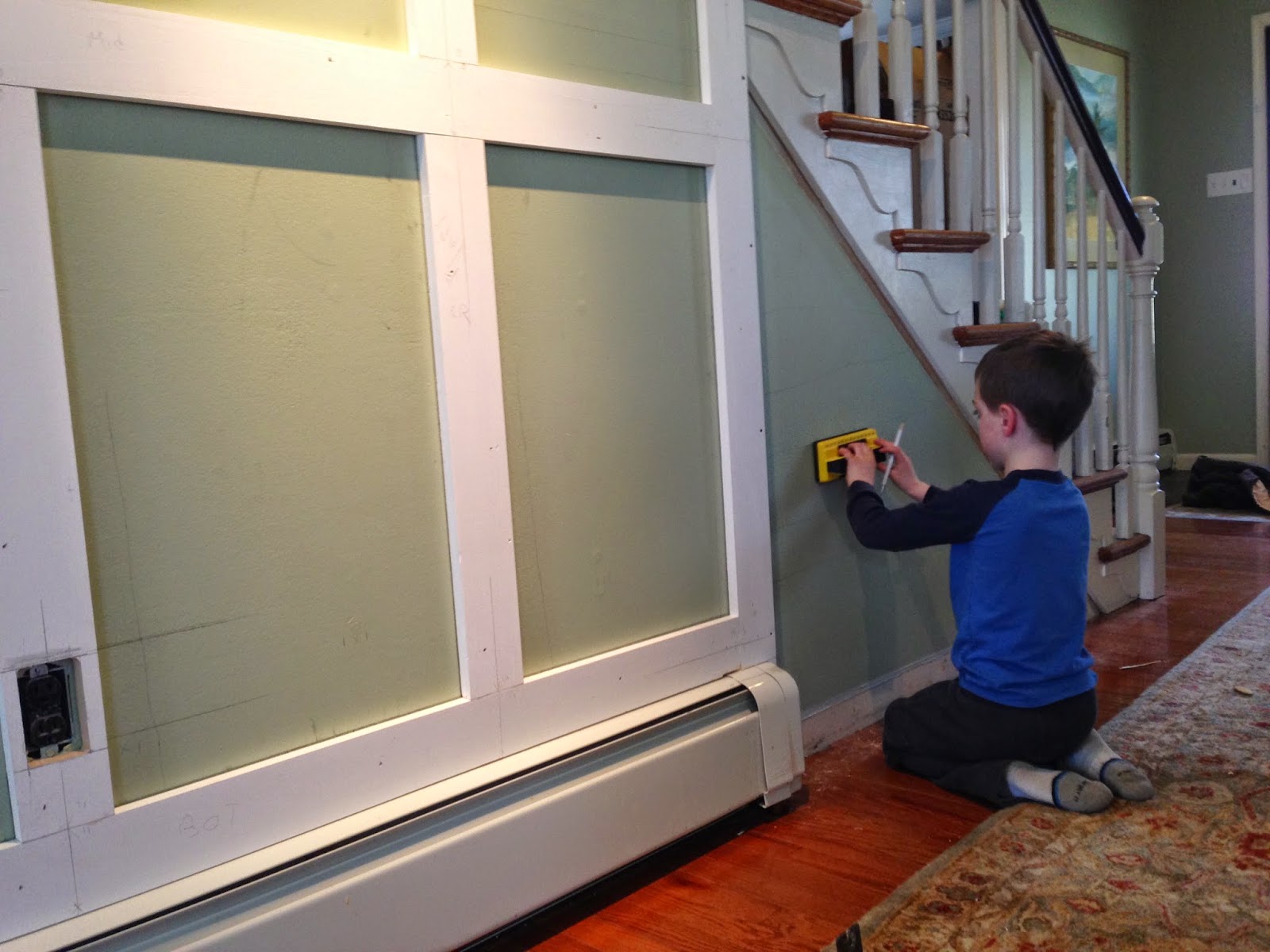 Apply construction adhesive to the backs.

Apply glue to the biscuit and the holes.

Place and level before the glue dries.

Nail all the boards and screw the outside corners (so that as the seasons change and the wood wants to expand and contract the seams won't pull away).

This is where we currently are.  We still need to add the rest of the trim to the boxes and the ledge up top.  Then I have to finalize a paint color. 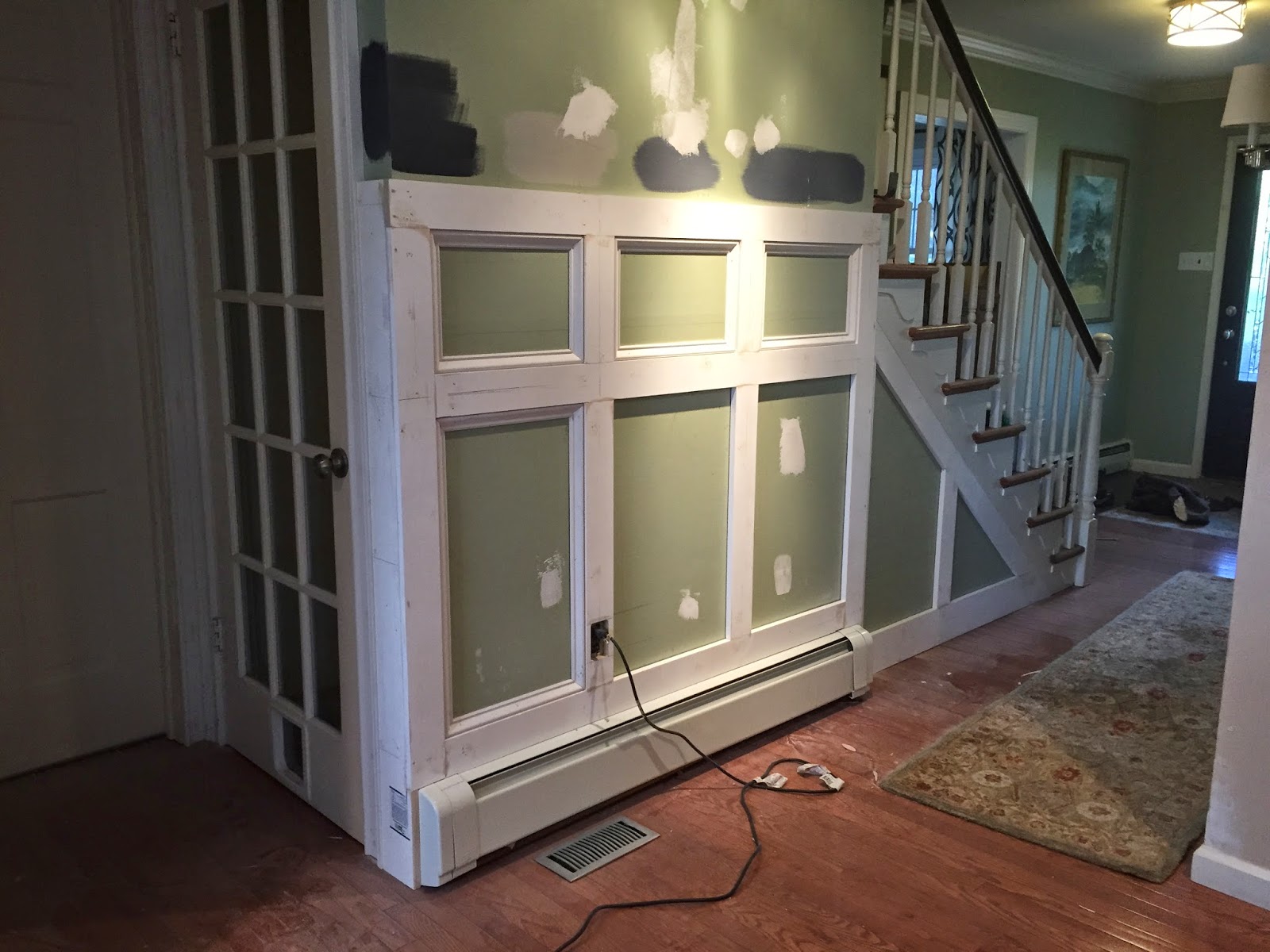 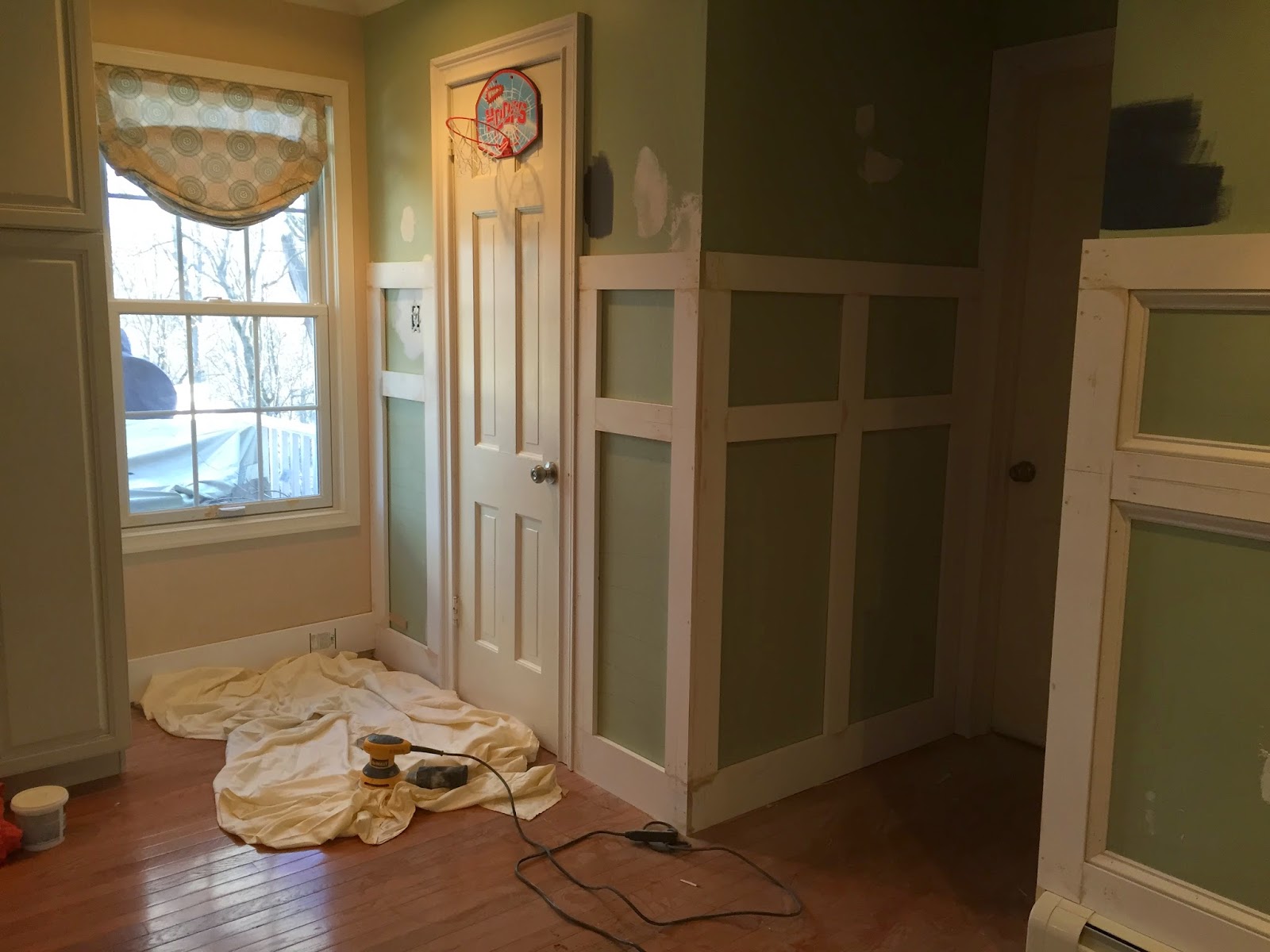 I'm pretty sure my cleaning lady hates us...
Posted by meg at 5:00 AM No comments:

Remember that time I said I never needed to install wainscoting ever again? 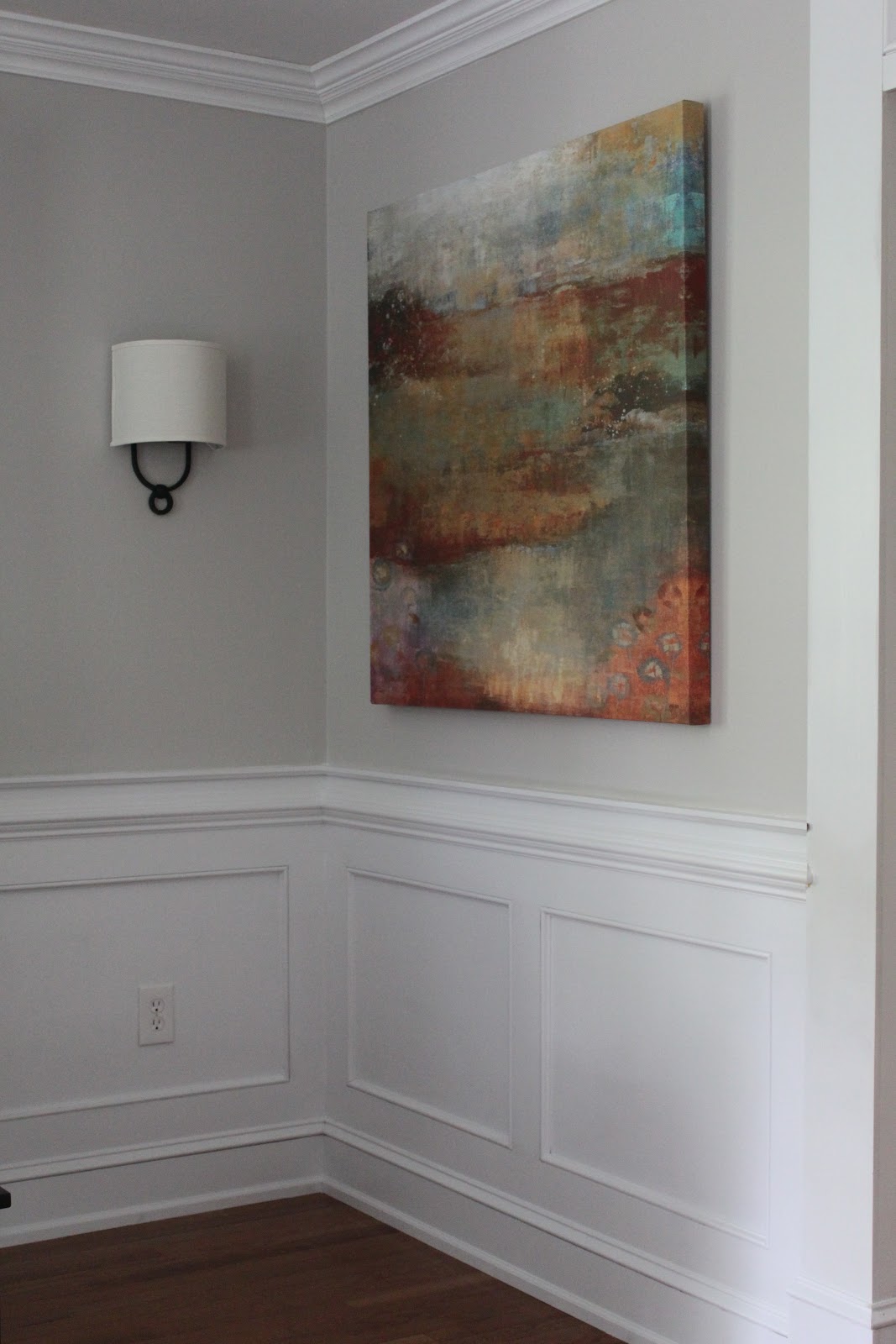 And then how I totally forgot and did it again here? 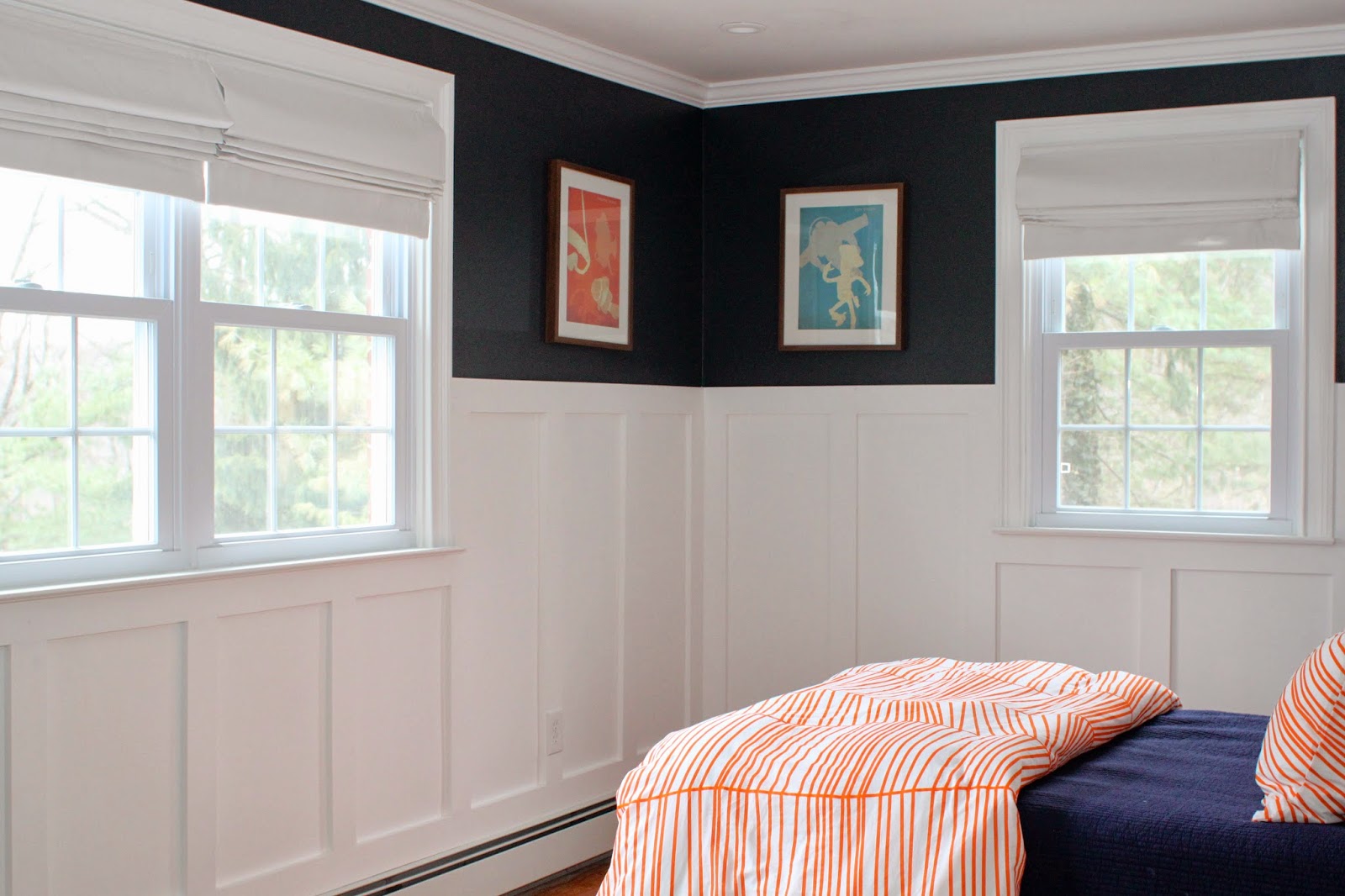 Well apparently amnesia has kicked in again and my husband has allowed me to sweet talk him into it yet again.  I got bit by the paint bug last week and casually mentioned to my husband that the green may be disappearing soon and that the "long term" plan would be to add wainscoting like this one to give us some additional color options:

He responded with "it shouldn't be too hard" and kind of agreed.  I took that as my green light and literally began drawing all over the walls 10 minutes later.  No going back now.  Very 4 year old of me. 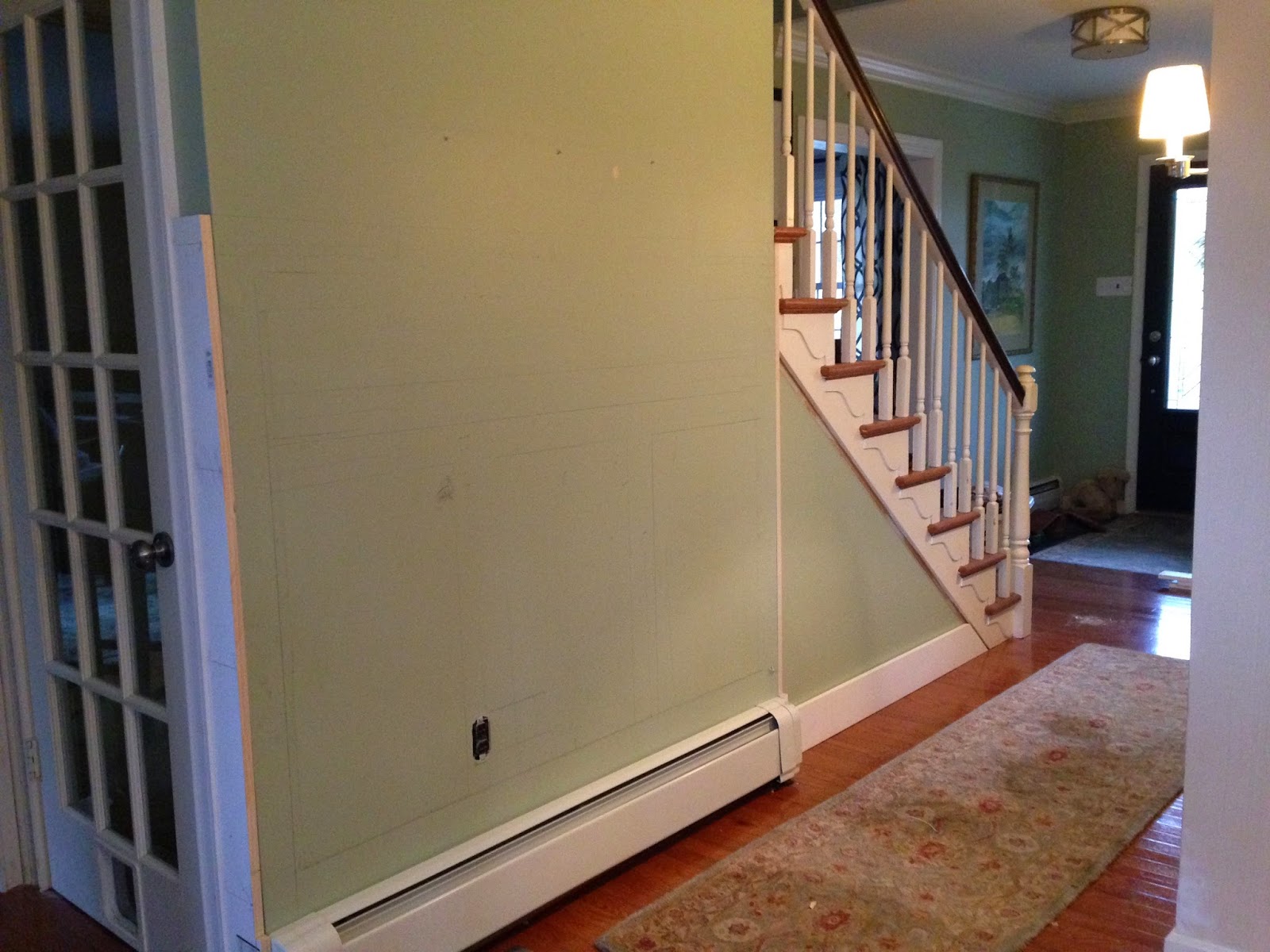 So my plan is go go with a wainscoting 3/4 of the way up the all and then go for this faded navy up top.

Then hopefully add some interesting art to tone down the color and to incorporate some other tones. 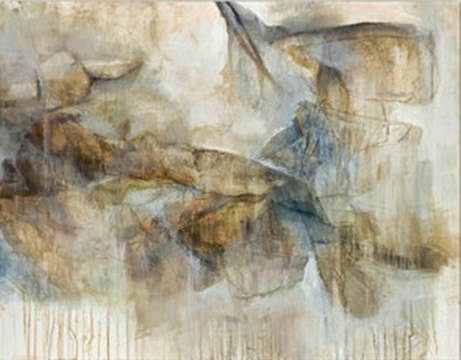 Our hallway has been this shade of green for 5 years.  That's way overdue for a change in Martin house years.  I still like it.  Just looking for a change. 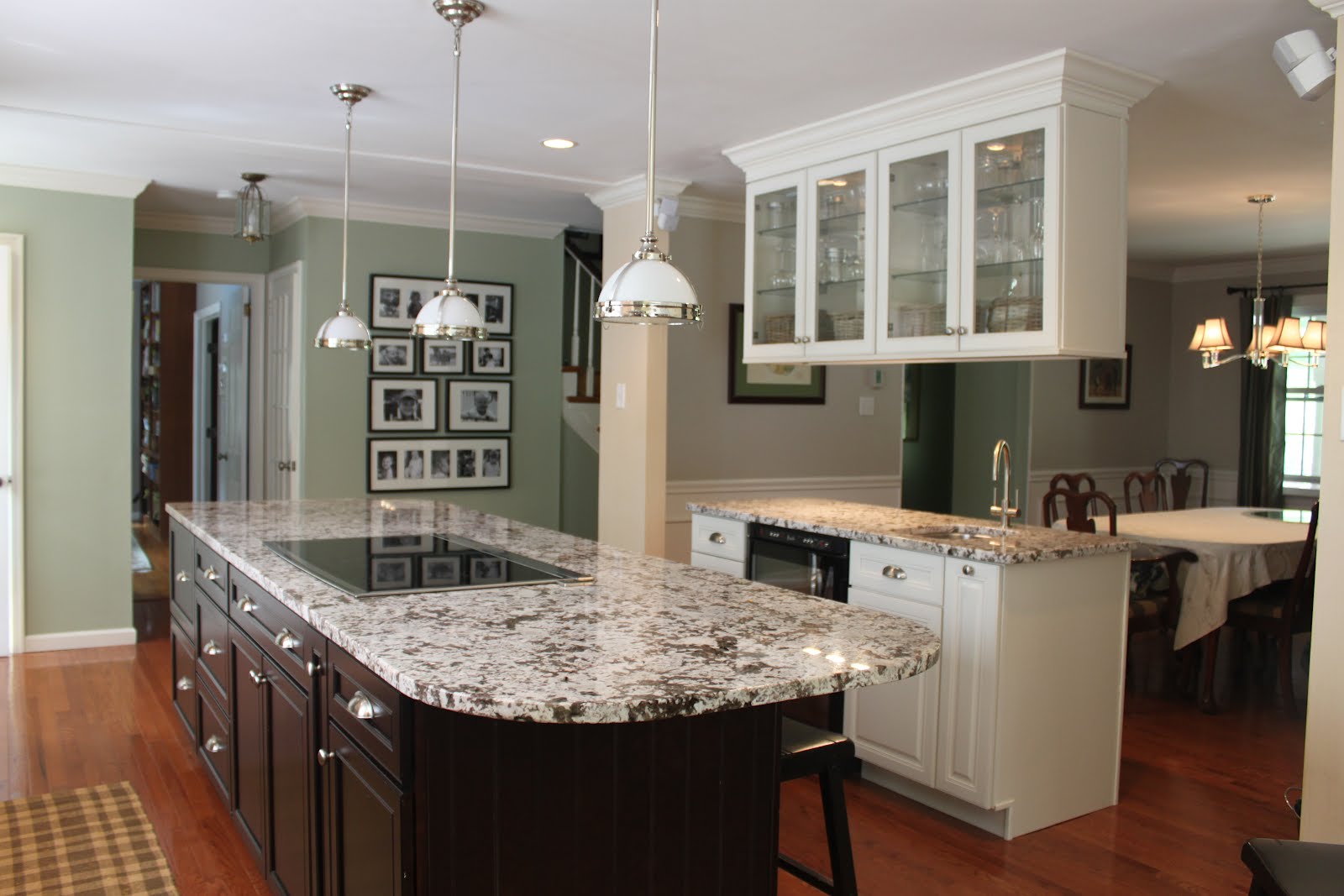 The other reason is that now that we've wallpapered the powder room off the hallway the greens clash and we cannot have that can we? 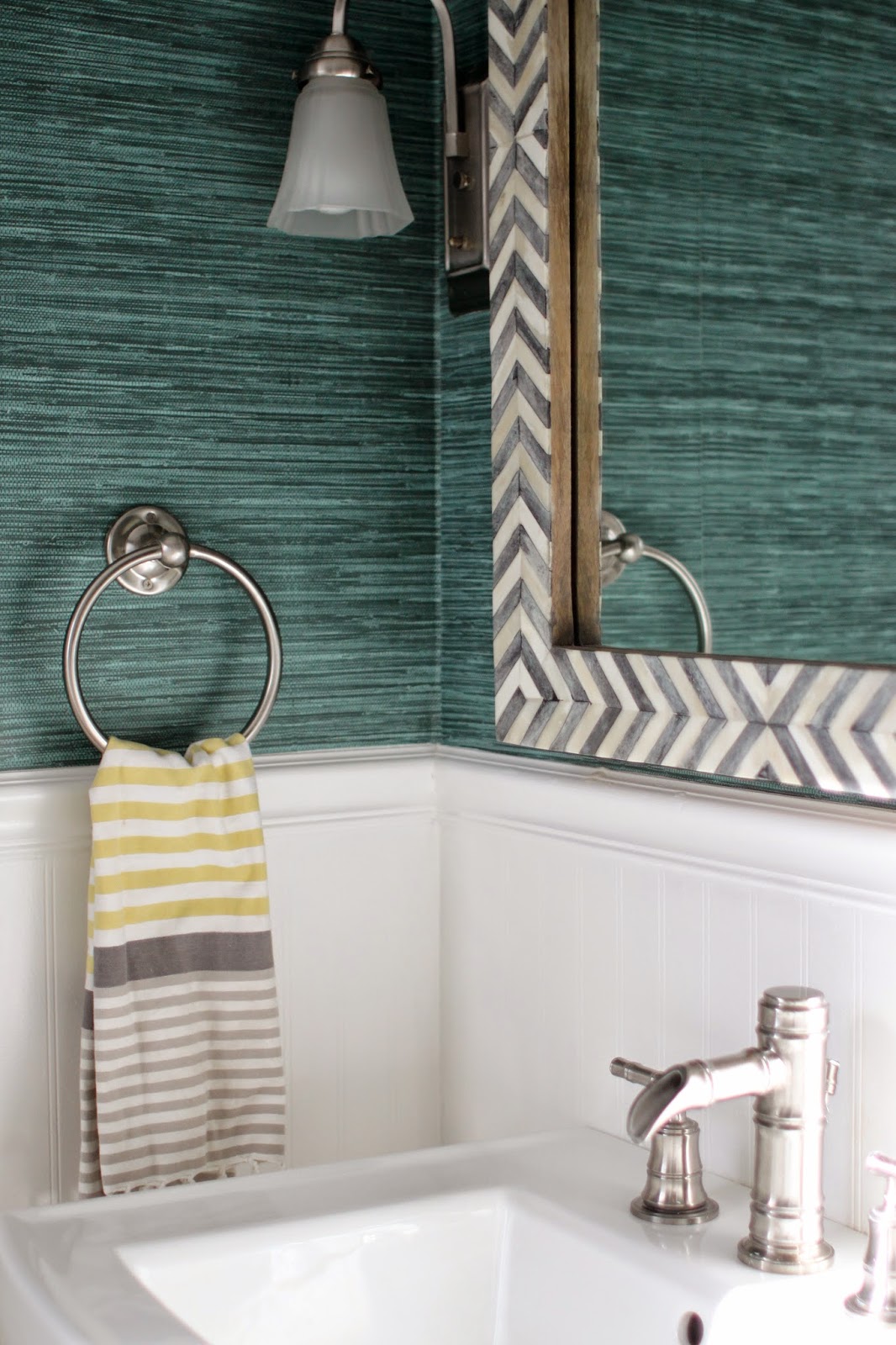 So this is what we're starting with. 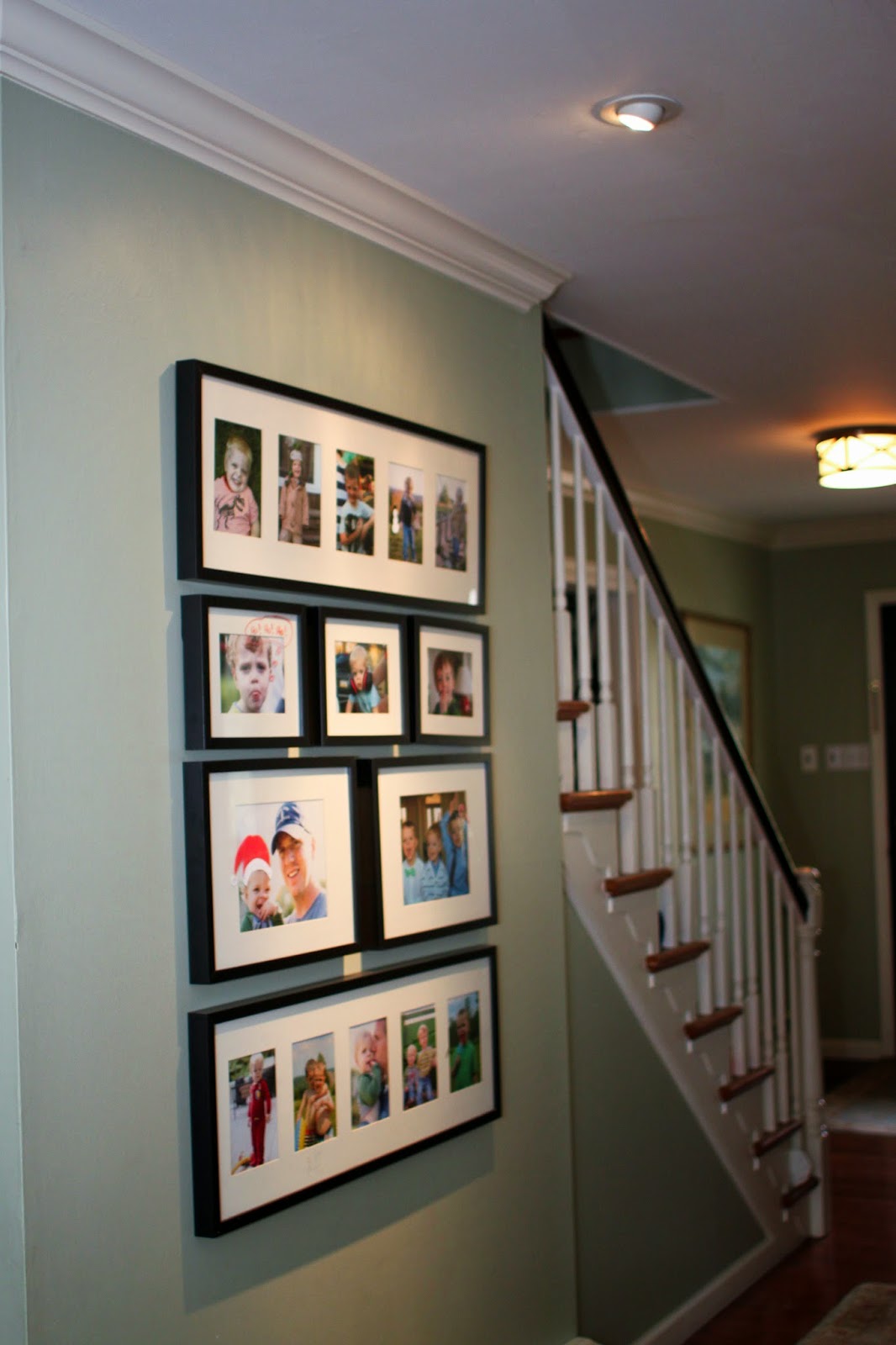 I want to go a bit more bold but there is not a lot of natural light in this area so in order to do that I'm going to need to bring in some more white trim work.

I'm thinking something in the gray/blue family with some wainscoting.

Good thing my husband likes me.