This is a shot of the awful fireplace wall the day we moved in.  As part of the kitchen renovation we ripped out most of the brick and the wood mantle. 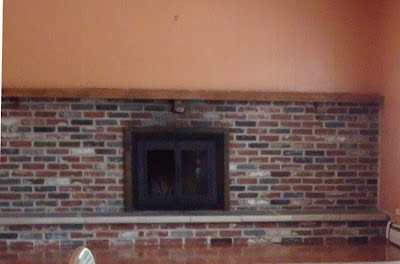 We then framed the walls where the brick used to be, insulated and drywalled.
This is what it looked like after all the brick was tossed and the new drywall hung. 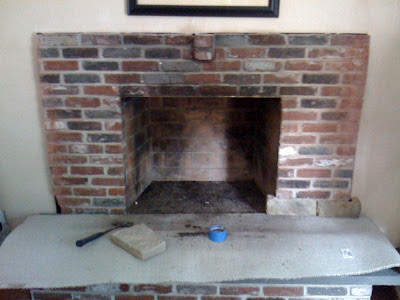 Next we applied a scratch coat over the brick. Because our brick had never been painted we didn't need to install lath first. The brick corbels will eventually be covered in stone and serve as the support for the slate mantle. 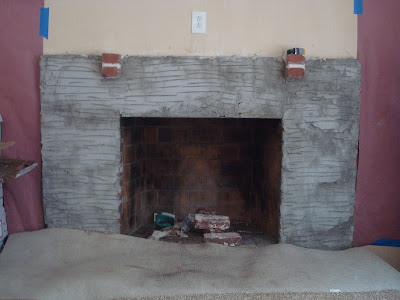 We used an Eldorado stone which has a very authentic look. We taped off an area on our deck the size of the fireplace first to dry fit all the stones to ensure we liked the look before we mixed our thin set. That was time consuming but very important. We had some difficulty getting the stone to stick on the row with the keystone because there was no row beneath it to support while it dried. We eventually built a support out of 2x4's to brace it until it dried. We then came back and piped in some mortar in the cracks. 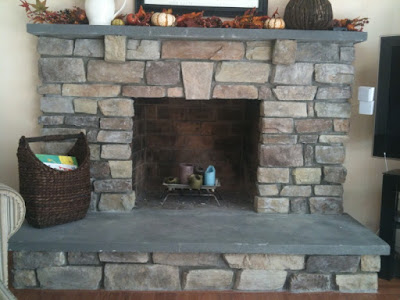 We hired a local carpenter to build bookcases flanking the fireplace. We've been working on our DIY skills over the years but serious carpentry is one we haven't mastered yet so we left this one up to the professionals. They were built out of MDF and color matched to the kitchen cabinetry. 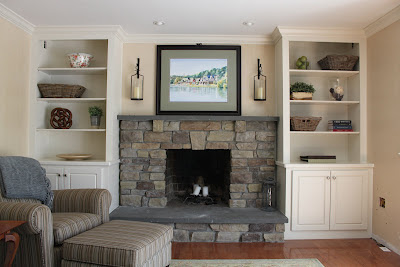 So that was my version that probably read like an HGTV "how to" commercial. Don't you find it amazing how they'll give you instructions on something complicated like "how to install kitchen cabinets" in a 30 second commercial? Like anyone would be versed enough after that to install their kitchen.
Here's the real nitty gritty from the doer in our operation (I'm just there to look cute):
Added to link party: Between Naps On The Porch
Posted by meg at 7:13 PM