We break from our regularly scheduled programing to bring you this very important public service announcement on a common household poison.  Citronella fuel oil poisoning and kids.

Two years ago this spring my family was out enjoying the first nice, spring day of the year.  We had spent the day dragging our patio furniture out of winter hibernation and were getting ready to head to a BBQ.  In the blink of an eye our son Matthew, 21 months old at the time, climbed up on patio chair, reached for a decorative citronella fuel oil lantern we had on the table and brought it up to his face.  We’re not sure if he thought it was a toy ball or a sippy cup or what he was trying to do with it but the oil spilled all over his face.  He immediately began coughing. 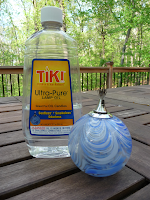 Unsure of what to do we called my physician father who told us to immediately head to the ER.  My husband rushed him to Bryn Mawr Hospital while I stayed back with our then 4 week old son, pacing nervously.  Sean called me a little while later and said they were going to transport him via ambulance to the ICU at the Children’s Hospital of Philadelphia (CHOP) and that I needed to get there.  I remember him sounding so matter of fact on the phone, almost robot-like, probably due to shock.  I began running around the house trying to get things I’d need.  His stuffed doggy would make him feel better.
I had to take my newborn son to a friend’s house because I didn’t want him around the germs of a hospital.  Her house is 2 miles away and I’d been there many times before but I was in such a haze that I kept getting lost.  It felt like a bad dream I couldn’t wake up from.
I arrived at the Emergency Room to find a swarm of people around my baby.  He sat on Sean’s lap with IV’s, crying.  After some debate between the doctors at Bryn Mawr and CHOP the decision was made to put him under and intubate before transport.  Seeing that procedure performed is something I never want to experience again.  We sang Twinkle, Twinkle Little Star to keep him calm and then he was unconscious.  Just hours prior he was running around our deck while we listened to the Phillies on the radio and now he was laying unconscious in a hospital bed.
CHOP sent an ambulance, a doctor and a nurse to pick us up.  I rode with them.  It was surreal.  My baby was unconscious in the back of an ambulance.  Please God, not my baby.
He was brought into the ICU, a flurry of activity around him.  I stood off to the side while they worked on him.  Eventually the team dissipated and I was left holding my baby’s hand.  Unconscious, looking like he was napping like I’d watched him do a hundred times before.  Except this time there were tubes coming out of his nose.  Machines helping him to breathe.  Wearing nothing but a diaper so they could easily work on him.  A kind nurse made sure that his stuffed doggy was always sitting on his shoulder, right next to his face. 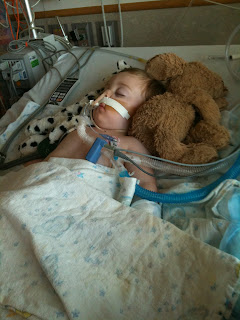 They had to keep administering drugs to keep him from waking up in a panic and vomiting the chemical.  We got used to the hourly chest x-ray’s.  We became too versed in the ability to spot the haze of the chemical in his lungs on the x-rays.  We watched his stats on the machines, praying the numbers wouldn’t go down.  We’d listen and ask questions to the team of doctors that would come around and talk to us like we were in a Grey’s Anatomy episode.  They said they were confident he would be fine but he had to remain sedated and intubated for a few days because with citronella poisoning the child can look fine initially but their health could decline in a matter of hours.  It was a painful waiting game.
We didn’t sleep, we didn’t eat.  Sunday came and went.  Monday came and went.  No real improvement on his x-rays but thankfully he wasn’t getting worse which was a positive sign.  Finally on Tuesday it was decided it was probably safe to wake him up.  The first thing he asked for with his scratchy voice was his ‘binky.’  Our baby was back.
By this point we started taking turns giving each other breaks.  We acted so strong in the bubble of the ICU but after those elevator doors opened and dumped us out into the fresh spring air, seeing life go on around us with the bustle of activity in the city, reality sunk in.  We weren’t dreaming.  Our lives were almost destroyed but miracle of miracles, we got our baby back.
By Thursday his lungs were clear and we were free to take him home.  Those days in the hospital felt like both an eternity and a flash at the same time but we were finally home.  Matthew is almost four now.  He has made a full recovery with no residual damage.  He is a miracle.
This story is always difficult for me to tell but one I believe needs to be told in order to prevent this from happening to another family.  The director of poison control at CHOP told us Matthew was the first of many cases of citronella fuel oil poisoning they would see that season.  Why had I never heard of this before?  We had child locks, gates, locked up the cleaning products, locked up the medicines.  I consider us good parents.  I’ve heard it so many times before and it is true, it can happen to anyone and it can happen in an instant.
Through all this I was given the gift of perspective.  It sounds so simple.  A healthy little boy and the perspective to enjoy him, his brothers and our life together.  It has changed the way I parent, changed the way I react and changed the way I live.  2 year old tantrums?  Whatever.  4 year old whininess?  Bring it.  I was blessed with 3 healthy, happy, energetic little boys and I couldn’t be luckier.  So hug your babies close and enjoy every miraculous minute.
Some technical information on the dangers of citronella oil:
Citronella fuel oil is one of the most dangerous household chemicals you can have in your home.  I'm just a parent, not a doctor so I can't get into the specifics about which ingredient(s) is the culprit but my main goal is to spread the word that this common household substance can be extremely dangerous.   Torch lamp fuels are often packaged in containers that resemble plastic apple juice bottles yet can be very toxic if ingested or inhaled, causing severe lung injury and even death.   When aspirated into the lungs, citronella fuel oil coats delicate tissues with toxic vapors, causes chemical pneumonia, and can trigger fatal pulmonary arrest.  We all know to keep the bottle the oil comes in out of reach of children but many homes have tiki torches or table lanterns containing the oil that are accessible to kids.   Toddlers are notorious for climbing and pulling up on things.  They can pull a tiki torch down, splashing the oil on their face or grab lanterns full of oil that looks like apple juice on patio tables (just as dangerous unlit).  Keep these items stored when not in use and keep a close eye on kids when they are out.

Please pass this story along to anyone who may benefit from this information.
Posted by meg at 9:33 AM